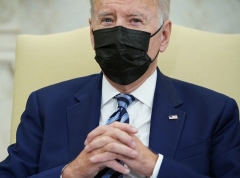 That's the lowest approval rating of his presidency so far, and it's the third consecutive month of majority-level disapproval. He took office with a 57 percent approval rating.

In the most recent November 1-17 poll, 55 percent of Americans said they disapprove of the job Biden is doing.

Gallup pollsters asked American adults if they "approve or disapprove" of the way Biden is handling six specific issues.

Opinion was evenly divided on Biden's handling of the coronavirus -- 49 percent/49 percent -- but majorities of adults disapproved of the way Biden is handling five other key issues, as follows:

Disapproval was sharpest on the immigration issue: 66 percent disapprove, while 31 percent said they approve.

On the economy, as inflation worsens, 61 percent disapprove, 38 percent approve.

On foreign affairs, it was 59 percent disapproval and 38 percent approval.

On crime, the split was 57 percent approval, 39 percent disapproval.

And on health care policy, 53 percent disapproved, while 44 percent approved.

The bottom line, according to Gallup:

Roughly ten months into his presidency, Biden's overall job approval rating remains tepid, sharply polarized and historically low on a relative basis. His ratings on a range of key issues are similarly middling and politically divided.

While Biden maintains nearly unanimous approval for his overall performance among his base, Democrats' ratings on several issues are faltering. Economic woes, perceived missteps in the withdrawal from Afghanistan, and continuing debates about the southern border of the U.S. and refugees from other countries are all weighing on Americans' minds. The pandemic is another serious pain point for the U.S., and cases are once again rising.

It remains to be seen how much the infrastructure law, and possibly the social services legislation Democrats are still negotiating, will benefit Biden's approval rating once those policies are implemented. While it is unlikely that Republicans' ratings of Biden will increase much regardless of what he does, he could regain the approval of independents and build upon his strength with Democrats.