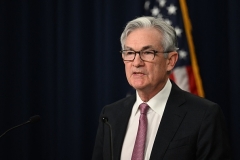 The Federal Reserve raised the federal funds rate by half-a-point. The rate hike applies to banks that borrow from each other overnight, but the increase will affect consumers who borrow as well -- higher rates for mortgages, car loans, credit card debt, etc.

Powell also hinted a more rate hikes to come: "What we are doing is we raised 50 basis points today and -- and we've said that, again, assuming that economic and financial conditions evolve in ways that are consistent with our expectations, there's a broad sense on the committee that additional 50 basis increases...should be on the table for the next couple of meetings."

At his news conference, Powell said inflation is "very unpleasant," as people are "paying more for the same thing."

"So we understand the pain involved. So, how do you -- how do you get out of that?" Powell asked. "It's our job to make sure that -- that inflation of that unpleasant, high nature doesn't get entrenched in the economy. That's what we're here for, one of the main things we're here for, perhaps the most fundamental thing we're here for.

"And the way we do that is we try to get supply and demand back in -- in sync with each other, out of -- back in balance so that the economy is under less stress and -- and inflation will go down. Now, the process of getting there involves higher rates, so higher mortgage rates, higher borrowing rates and things like that.

"So, it -- it -- it's not going to be pleasant either. But in the end, everyone is better off. Everyone, particularly people on fixed incomes and at the lower part of the income distribution, are better off in -- with stable prices. And so, we -- we need to do everything we can to restore stable prices. We'll do it as quickly and effectively as we can.

"We -- we think we have a -- a good chance to do it without -- without a -- without significant increase in unemployment or a, you know, really sharp slowdown. But ultimately, we think about the medium and longer term, and everyone will be better off if we can get this job done, and the sooner the better."

Powell said he thinks the Fed stands a "good chance" of bringing down inflation without causing a recession and higher unemployment.

"So, I see a strong economy now. I see a very strong labor market, for example. Businesses can't find the people to hire. They can't find them. So, typically in a recession, you would have unemployment. Now you have surplus demand (jobs unfilled). So, there should be room, in principle, to reduce that surplus demand without -- without putting people out of work."

Powell said the Fed's main tools are interest rates and its balance sheet, which are "not capable of surgical precision."

"No one thinks this will be easy. No one thinks it's straightforward. But there is certainly a plausible path to this," he said.

A reporter asked Powell if he's confident he can slow hiring without causing an economic downturn:

"There's a path by which we would be able to have demand moderate in the labor market and...therefore, have (job) vacancies come down without unemployment going up, because vacancies are at such an extraordinarily high level. There are 1.9 vacancies for every unemployed person, 11.5 vacancies (for) 6 million unemployed people," Powell said.

"So, in principle, it seems as though by moderating demand, we could see vacancies come down and as a result -- and they could come down fairly significantly, and I think could put supply and demand at least closer together than they are.

"The labor market is, as I mentioned, very, very strong. And so it doesn't seem to be anywhere close to a downturn. Therefore, the -- the economy is strong and is well positioned to handle tighter monetary policy. So -- but I'll say, I do expect that this will be very challenging. It's not going to be easy.

"And it may well depend, of course, on events that are not in our -- under our control. But our job is to use our tools to try to achieve that outcome, and that's what we're going to do."