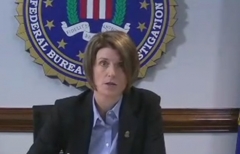 (CNSNews.com) - Who is Ray Epps, the man caught on videotape urging a crowd of Trump supporters to break into the Capitol? Did any FBI agents or FBI informants actively encourage and incite crimes of violence on January 6?

"I can't answer that," the FBI's Jill Sanborn said repeatedly in response to questions put to her by Sen. Ted Cruz (R-Texas) at a hearing of the Senate Judiciary Committee on Tuesday.

Sanborn is the executive assistant director of the FBI's National Security Branch.

Cruz: "How many FBI agents or confidential informants actively participated in the events of January 6?"

Sanborn: "Sir, I'm sure you can appreciate that I can't go into the specifics of sources and methods."

Cruz: "Did any FBI agents or confidential informants actively participate in the events if January 6, yes or no?"

Cruz: "Did any FBI agents or confidential informants commit crimes of violence on January 6?"

Cruz: "Did any FBI agents or FBI informants actively encourage and incite crimes of violence on January 6?"

Sanborn: "I'm aware of the individual, Sir. I don't have the specific background of him."

Cruz: "Well, there are a lot of people who are understandably very concerned about Mr. Epps. On the night of January 5, 2021, Epps wandered around the crowd that had gathered and there's video of him out there chanting, "tomorrow we need to get into the Capitol -- into the Capitol." This was strange behavior, so strange, that the crowd began chanting, "Fed, Fed, Fed. Fed, Fed, Fed." Miss Sanborn, was Ray Epps a Fed?"

Sanborn: "Sir, similar to the other answers, I cannot answer that."

Cruz: "Shortly thereafter, the FBI put out a public post -- listing, seeking information on individuals connected with violent crimes on January 6. Among those individuals at the bottom there is Mr. Epps. The FBI publicly asked for information identifying -- offering cash rewards...for information leading to the arrests. This was posted, and then some time later, magically Mr. Epps disappeared from the public posting.

"According to public records, Mr. Epps has not been charged with anything. No one's explained why a person videoed urging people to go to the Capitol, a person whose conduct was so suspect the crowd believed he was a Fed would magically disappear form the list the FBI was looking at."

"Not to my knowledge, sir," Sanborn said.

Cruz ended his questioning there.