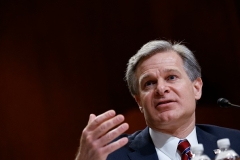 FBI Director Christopher Wray testifies before a Senate Appropriations subcommittee on May 25, 2022. (Photo by TING SHEN/POOL/AFP via Getty Images)

"In fact, rising violence is the number one concern I hear about from chiefs and sheriffs all across the country, with whom I speak just about every week," Wray said. "With those partners, we're leading hundreds of task forces to get the worst of the worst off the streets."

Sen. Jeanne Shaheen (D-N.H.) told Wray, "[T]here's no doubt, as you pointed out, that violent crime is increasing. I see that in my home state of New Hampshire. And it seems like over the last couple of years, it's been a reaction to COVID, to the opioid epidemic, to factors -- obviously, the availability of weapons is another factor.

"Are there other things that we're thinking have happened over the last couple of years that have really contributed to the violent crime that we're seeing today?" she asked.

"Well, I would -- I would agree with the first, the several that you listed," Wray responded:

"I would add to that the -- that we are seeing, for a variety of reasons, in some places, way too many of repeat offenders or dangerous offenders ending up back out on the street -- certain prosecution practices or sentences that don't adequately keep somebody behind bars when they really need to be.

"And I would say that a lot of police departments in this country, if you talk to most chiefs and sheriffs, which I -- as I said, I'm doing just about every week, most of them are really struggling with recruiting and retention, and that certainly doesn't help.

"So we need to support the men and women of law enforcement, because that's who stands between us and the violent criminal element."

FBI helping locals go after ‘the worst of the worst’

Wray noted that the FBI created a Violent Crime Rapid Deployment Team about six months ago:

"And what that does is, we've been sending it to particularly hard-hit hotspots or cities at the...request of the -- of both the FBI field office and our local partners to assist.

"And we've had very good luck in the six or so cities where we've done that. I know in Buffalo, for example, you know, several months ago we had about a 50 percent decrease in homicides. During the surge in Milwaukee, I think we had a pretty significant decrease. But -- but that's by its very nature somewhat temporary.

"We can't send those teams to just be there sort of in perpetuity. So part of what we're trying to do is both achieve a short-term dramatic reduction by listening closely to the locals as to what they most need, but then also trying to put in place things that will have a more sustained durable impact that will outlive the team's deployment.”

Wray said he expects to keep sending the team to different places.

"But ultimately," he said "the violent crime problem...dominates every discussion I have with chiefs and sheriffs all the time."

He pointed to the most recent nationwide crime data showing a five-percent increase in the violent crime rate, "which doesn't sound like much, maybe, to some Americans, until you stop and think that that means 67,000 people, victims, of violent crime that weren't -- would not have been a victim the year before.

"And the homicide rate went up 30 percent, which is I think the highest in, like, 50 years increase. So any resources, the committee, the subcommittee would be able to send us on the violent crime problem could immediately be put to very effective use. And there would be a lot of state and local partners who would be very grateful as well.

"Because one of the things we're really trying to do all across the country is lean in to see where we can take cases federally to get some of the worst of the worst and to dismantle some of the most significant gangs, and keep them off the streets for -- for a much longer period of time."

Moran asked Wray if there's a "common denominator" in communities that have the most significant increases in violent crime.

"You know, violent crime is by its nature, unfortunately, a little bit different everywhere," Wray responded:

"And that's why we really have to take -- not a one-size-fits-all. And so what I mean by that is, in one community, it might be a particular neighborhood gang that has just run amok. And if you -- if you really drill down, you may find that the homicide rate is being disproportionately driven by that one gang's activity.

"In another community, there could be a rampage of commercial robberies or carjackings, and that's what's really driving it. In another place, it could be a particular neighborhood or a particular corridor on a highway that's part of a drug trafficking route.

"In another place, it could be -- and this is something we are seeing in a lot of places -- too many repeat dangerous offenders who are either out on bail or who have been not serving very long sentences.