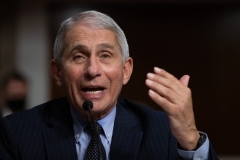 Dr. Anthony Fauci is Director of the National Institute of Allergy and Infectious Diseases (Photo by GRAEME JENNINGS/POOL/AFP via Getty Images)

(CNSNews.com) - It comes as no surprise to medical experts or the American public that COVID cases are rising as the holiday season and colder weather have people meeting and mingling indoors.

That trend will continue, Dr. Anthony Fauci told ABC's "This Week" with Martha Raddatz on Sunday:

So clearly, in the next few weeks, we're going to have the same sort of thing, and perhaps even two or three weeks down the line, Martha, we may see a surge upon a surge.

You know, we don't want to frighten people, but that's just the reality. We said that these things would happen as we got into the cold weather and as we began traveling. And they've happened. It's going to happen again.

Fauci says people who have been with others outside of the immediate family should either "quarantine yourself for a period of time, or even get tested to make sure that you're not bringing infection back to another place, be it another home, or another family."

And while COVID testing is more widespread than it used to be, Fauci said he wants to see more regular testing, including at-home testing, for asymptomatic people, because they are unwittingly contributing to the virus's spread.

"Rapid, sensitive specific home testing, even one you might not need a prescription for so that people can have within their own power to know whether or not -- it isn't as highly sensitive as the other, but it is very helpful, particularly if you do it over and over again. I hope we get that soon," Fauci said.

He also noted that "help is on the way," in the form of vaccines.

"Vaccines are really right on the horizon. We'll be having vaccines available for the higher-priority people towards the middle and end of December and as we get into January and February.

"So everyone is totally empathetic about the fatigue that everyone is feeling. But if we can hang in there -- hang in there a bit longer and do the fundamental things, wearing of masks uniformly, avoiding crowds in congregate settings, keeping physical distance, washing your hands -- they seem simple in the enormity of the problem that we're facing, but they do make a difference."