Fauci: 'The Consequences Could Be Really Serious' If Reopening Guidelines Are Ignored 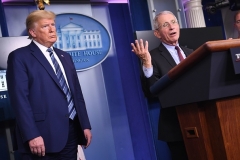 Director of the National Institute of Allergy and Infectious Diseases Anthony Fauci appears with President Trump at a news briefing at the White House on April 5, 2020. (Photo by Eric BARADAT/AFP via Getty Images)

(CNSNews.com) - Dr. Anthony Fauci, testifying before a Senate committee on Tuesday, advocated a cautious approach to reopening the nation's economy.

"The consequences could be really serious," Fauci warned, if states ignore the federal guidelines of "how to safely open America again."

Fauci, director of the National Institute of Allergy and Infectious Diseases, testified remotely because he is in self-quarantine, as are the other witnesses, because of exposure to a White House staffer who tested positive for the virus.

“As I said many times publicly, what we have worked out is a guideline framework of how to safely open America again," Fauci told the Senate Committee on Health, Education, Labor and Pensions.

He noted there are "several checkpoints," depending on the "dynamics" of the outbreak in a particular area, that should determine the speed with which a state or locality reopens:

So my word has been, and I've been very consistent in that I get concerned if you have a situation ... such that you are not seeing that gradual over-14-day decrease that would allow you to go to phase 1, and then if you pass the checkpoints of phase 1, go to phase 2 and phase 3.

What I've expressed again and again is my concern that if some areas of cities, states, what have you, jump prematurely over those checkpoints and prematurely open up without having the ability to respond and open up effectively and efficiently, my concern is that we'll start to see little spikes that will turn into outbreaks.

Sen. Patty Murray (D-Wash.) asked Fauci, "So if a community or a state or a region doesn't go by those guidelines and reopen, the sequences could be pretty dire, correct?"

"The consequences could be really serious," Fauci responded, "particularly -- and this is something that I think we also should pay attention to -- that states, even if they're doing it at an appropriate pace, which many of them are and will, namely a pace that's commensurate with the dynamics of the outbreak, that they have in place already the capability that when there will be cases, there is no doubt even under the best of circumstances, when you pull back on mitigation, you will see some cases appear.

"It's the ability and the capability of responding to those cases with good identification, isolation and contact tracing will determine whether you can continue to go forward as you try to reopen America.

"So it's not only doing it at the appropriate time with the appropriate constraints, but having in place the capability of responding when the inevitable return of infections occur."

Later, asked to restate the concern he had earlier expressed to Sen. Murray, Fauci obliged:

Yes, my concern is that if states or cities or regions, their attempt to, understandable, to get back to some form of normality, disregard to a greater or lesser degree the checkpoints that we put in our guidelines about when it is safe to proceed in pulling back on mitigation, because I feel if that occurs there is a real risk that you will trigger an outbreak that you may not be able to control, which in fact, paradoxically, will set you back not only leading to some suffering and death that could be avoided, but could even set you back on the road to try to get economic recovery, because it would almost run the clock back rather than going forward. That is my major concern.

President Trump told a news conference on Monday, the American people "want to go back" to work:

The numbers are getting to a point where they can, and it just seems to be no effort on certain blue states to get back into gear. And the people aren't going to stand for it. They want to get back. They're not going to stand for it. They want our country open. I want our country open, too. I want it open safely, but I want it open.

So it's a--it's a situation that some people, and I've noticed that some states could be moving more quickly and also at the same time safety. Look, safety is paramount. But people are dying in the lock down position, too, and everybody understands that. They are just starting to find out. And look at what's going on with drugs and look at what's happening with suicides.