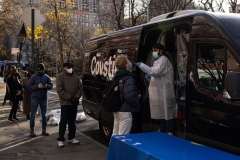 "We did, Jake," Fauci told the host of CNN's "State of the Union" on Sunday. "We definitely saw variants coming."

What was not anticipated was the extent of the mutations and the amino acid substitutions in Omicron, which is really unprecedented. It kind of came out of nowhere, where you have a virus that has 50 mutations, 30 of which are in the spike protein, and 10 or 12 of which are in the receptor binding domain. I mean, to me, that's really quite unprecedented. So that's something you would not have anticipated.

But we certainly were anticipating that there were going to be variants, because when you have so many viruses -- so much replication going on in the community, if you give a virus enough opportunity to replicate, you know it's going to ultimately mutate.

Appearing on NBC's "Meet the Press," Fauci defended Harris after host Chuck Todd asked the doctor: "[P]erhaps nobody could have seen the specific of Delta or Omicron, but did you not see variants coming, or did you?"

And I think that the vice president's statement was taken a bit out of context. I believe she was referring to the fact that the extraordinary number of mutations and amino acid substitutions, particularly with Omicron, no one had expected it that much.

But we were well-prepared and expected that we were going to see variants. There's no doubt about that.

But I believe that the vice president was referring to the fact -- if you look at the number of mutations in Omicron, it's unprecedented. There are about 50 of them, 30 of them in the spike protein. And about 10 to 12 of them on the receptor-binding domain. We've never seen anything like that before. So in that context, she was correct.

In an interview on CNN's "State of the Union," Fauci slipped a bit, immediately correcting himself on the availability of COVID testing, which is now in high demand and short supply:

"Is the state of testing in the United States acceptable to you?" Tapper asked the doctor, noting that people are waiting in long lines to be tested, and at-home tests have disappeared from some store shelves:

"Well, we got to do better. I mean, we are doing better," Fauci said.

If you look now compared to what we were a year ago, it's extraordinarily much different in the positive sense. We now have multiple, multiple at-home tests available, when we virtually had none a year ago. But we do need to do better.

The government now, the federal government, has been investing now several billion dollars to make anywhere from 200 million to 500 million tests available per month, many of them free. There are going to be at 10,000 centers that are going to be giving out free tests.

So we're going to be going in the right direction. We do. And I have said that myself many times, Jake, that we really need to flood the system with testing. We need to have tests available for anyone who wants them, particularly when we're in a situation right now where people are going to be gathering.

Even though they are vaccinated and boosted, they may want to go that extra step, that extra mile to know that, when we have people coming into the home, where they are going someplace, that you can know in 15 minutes whether or not you're positive.

On ABC's "This Week," Fauci recommended COVID tests for people who plan to gather with family and friends for the holidays:

"We now have a much wider availability of point-of-care tests that you can get a result in about 15 minutes. So, you might want to do that," Fauci said.

Karl noted that tests are unavailable in many places:

"Well, in some places, it is spotty," Fauci agreed:

"There are some places where you can easily get them, but there are others where you are quite correct, it is difficult and there are long lines. What the government has been doing now, and you're going to be seeing the result of that, is making investments literally in billions of dollars to get anywhere from 200 million to 500 million tests available per month, which means that there will be a lot of tests. Many of them will be free.

Fauci is concerned about where the pandemic is headed after the holidays, telling Tapper he agrees with President Biden that we are "looking at a winter of severe illness and death."

"Unfortunately, Jake, I think that that is going to happen," Fauci said:

We are going to see a significant stress in some regions of the country on the hospital system, particularly in those areas where you have a low level of vaccination, which is one of the reasons why we continue to stress the importance of getting those unvaccinated people vaccinated.

This virus is extraordinary. It has a doubling time of anywhere from two to three days. Right now, in certain regions of the country, 50 percent of the isolates are Omicron, which means it's going to take over. And if you look at what it's done in South Africa, what it's doing in the U.K., and what it's starting to do right now, the president is correct.

I mean, I was with him when he said that. And I spoke to him about that, that we are going to be in for some serious difficulties right now. And we better be doing more to mitigate against that. And it's never too late to get vaccinated. And if you're vaccinated, go get boostered. And be prudent in everything else you do.

When you travel in your indoor settings that are congregate, wear a mask. It is going to be tough. We can't walk away from that, Jake. We can't, because, with Omicron that we're dealing with, it is going to be a tough few weeks to months as we get deeper into the winter.