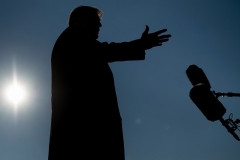 "However," the board said, "it was not appropriate for Facebook to impose the indeterminate and standardless penalty of indefinite suspension."

The board noted that "Facebook’s normal penalties include removing the violating content, imposing a time-bound period of suspension, or permanently disabling the page and account.

"The Board insists that Facebook review this matter to determine and justify a proportionate response that is consistent with the rules that are applied to other users of its platform. Facebook must complete its review of this matter within six months of the date of this decision. The Board also made policy recommendations for Facebook to implement in developing clear, necessary, and proportionate policies that promote public safety and respect freedom of expression."

The decision outlines the "key findings," as follows (verbatim):

-- The Board found that the two posts by Mr. Trump on January 6 severely violated Facebook’s Community Standards and Instagram’s Community Guidelines. “We love you. You’re very special” in the first post and “great patriots” and “remember this day forever” in the second post violated Facebook’s rules prohibiting praise or support of people engaged in violence.

-- The Board found that, in maintaining an unfounded narrative of electoral fraud and persistent calls to action, Mr. Trump created an environment where a serious risk of violence was possible. At the time of Mr. Trump’s posts, there was a clear, immediate risk of harm and his words of support for those involved in the riots legitimized their violent actions. As president, Mr. Trump had a high level of influence. The reach of his posts was large, with 35 million followers on Facebook and 24 million on Instagram.

-- Given the seriousness of the violations and the ongoing risk of violence, Facebook was justified in suspending Mr. Trump’s accounts on January 6 and extending that suspension on January 7.

-- However, it was not appropriate for Facebook to impose an ‘indefinite’ suspension. It is not permissible for Facebook to keep a user off the platform for an undefined period, with no criteria for when or whether the account will be restored.

-- In applying this penalty, Facebook did not follow a clear, published procedure. ‘Indefinite’ suspensions are not described in the company’s content policies. Facebook’s normal penalties include removing the violating content, imposing a time-bound period of suspension, or permanently disabling the page and account.

-- In applying a vague, standardless penalty and then referring this case to the Board to resolve, Facebook seeks to avoid its responsibilities. The Board declines Facebook’s request and insists that Facebook apply and justify a defined penalty.

The Oversight Board said if Facebook decides to restore Trump's accounts, "the company should apply its rules to that decision, including any changes made in response to the Board’s policy recommendations."