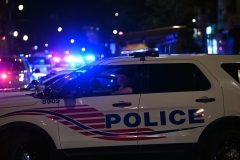 Police cars block a street after a shooting outside a restaurant in Washington, D.C., on July 22, 2021. (Photo by BRENDAN SMIALOWSKI/AFP via Getty Images)

(CNSNews.com) - Former U.S. Sen. Barbara Boxer, a liberal California Democrat, posted a tweet on Monday saying she was shoved and robbed of her cellphone on an Oakland street. The tweet, apparently quoting a news report, said:

"Earlier today former Senator Barbara Boxer was assaulted in the Jack London Square neighborhood of Oakland. The assailant pushed her in the back, stole her cell phone and jumped in a waiting car. She is thankful that she was not seriously injured.'"

As crime escalates across the nation, much of it brazen and in broad daylight, Sen. Lindsey Graham (R-S.C.) said what's changed is "deterrence."

No one feels afraid to go into Walmart and clean out the place because nobody in the prosecution level is going to do a damned thing, and the Democratic Party is the party of catch and release when it comes to criminals and illegal immigrants.

Graham pointed to the midterm election in 2022 as the remedy:

"If you think that law and order has been lost in this country, well then vote for candidates who pledge to support the cops. If you think the border is completely out of control and we are being overwhelmed by illegal immigrants regarding the spread of COVID and everything else, then you have a chance to vote for the candidate who promises to secure the border.

"What's happened in these cities is that we've turned our back on the cops, we're no longer prosecuting people when they commit petty crime, and we've lost the streets.

"Washington, D.C., is in complete decline -- you have homeless people all over town, families can't go out in the streets any more because the policies of the left, when it comes to crime, are not working."

"I think this is going to be 1994 all over again when you look at rampant inflation, out of control crime and a broken border and just a general lack of knowing what you're doing, lack of competency that the Republican Party is going to have a great comeback if we recruit the right people, and Herschel walker is the right guy for Georgia."