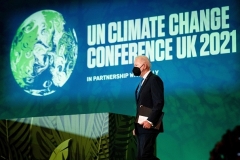 President Joe Biden speaks at the COP26 UN Climate Change Conference in the Scottish city of Glasgow on November 2, 2021. (Photo by ERIN SCHAFF/POOL/AFP via Getty Images)

(CNSNews.com) - Energy Secretary Jennifer Granholm told CNN on Sunday she "hopes" gasoline prices don't reach an average of $4/gallon anytime soon; but she agreed that home heating prices will rise this winter. "This is going to happen," she said.

When you saw this administration shut down the Keystone Pipeline -- I mean, one of the first things they did. Number one, the loss of really good union jobs, poof, went away. But that heavy crude coming down to the Gulf Coast, that is the type of crude that our refineries are set up to transition into gasoline.

So I mean, they -- they are doing an experiment on us right now, and this is like a chemistry lab gone bad. They are literally experimenting with America's future with these crazy ideas of shutting down pipelines because they're having to address -- the Green New Deal and the AOCs of the world.

Perry noted that just last year, America was energy independent. "We were exporting for the first time in, I think, 70 years," he said. "And that's what President Trump had asked me to do when he made the pitch to come and be in his Cabinet. He said, Perry, I want you to go and do for America what you did for Texas, and that's exactly what we did.

“We turned the United States into this incredible powerhouse -- energy, we were selling liquefied natural gas into Europe. We were making a difference in the world, and this administration has turned it on its head in a short ten-plus months. Stunning.”

Hannity asked Perry, "If we want to become energy independent again, how quickly would we be able to accomplish that?"

"I think it's going to take us a while to get back," Perry said, "but the main thing that's got to happen -- and it will be a little political here, we got to change the administration, and we got to change Congress so that they can't put these crazy policies into place.

“The idea that they are talking about shutting down the Enbridge pipeline that comes out of Canada, goes across Michigan, is nonsense. It's like they tried to stop the Dakota access pipeline. They did stop the XL pipeline," Perry continued.

“This -- this mentality that you're going to limit the amount of fossil fuels in the United States and somehow or another that's going to affect in any positive way the climate around the world-- and what drives me up the wall here, Sean, is that you've got John Kerry flying all around the world on his private jet lecturing other countries about the use of fossil fuels, and you got our secretary of energy begging OPEC to open up the spigots and give us a hand."

White House spokeswoman Karine Jean-Pierre on Monday called it "inaccurate" to say the Biden administration is considering shutting down the Enbridge/Line 5 pipeline.

"That is not right. So, any reporting indicating that some decision has been made, again, is not accurate."

Jean-Pierre said the Army Corps of Engineers "is preparing an environmental impact statement" on replacing Line 5.

"The EIS will help inform any additional action or position the US will be taking on the replacement of Line 5. This is a consistent with the President Biden's commitment that every infrastructure project, potential pipelines...included must undergo a full and fair review that considers the environmental impact that those projects would have.”

"So, you're saying the administration is waiting on the results?" a reporter asked.

Enbridge wants to build a Great Lakes Tunnel deep under the Mackinac Straits to house Line 5. "While Line 5 has operated safely and reliably in the Straits for more than 65 years, the Great Lakes Tunnel will be bored through rock, as much as 100 feet below the lakebed -- virtually eliminating the chance of a pipeline incident in the Straits," Enbridge said.

Michigan Gov. Gretchen Whitmer wants to shut down the pipeline, as do environmentalists.