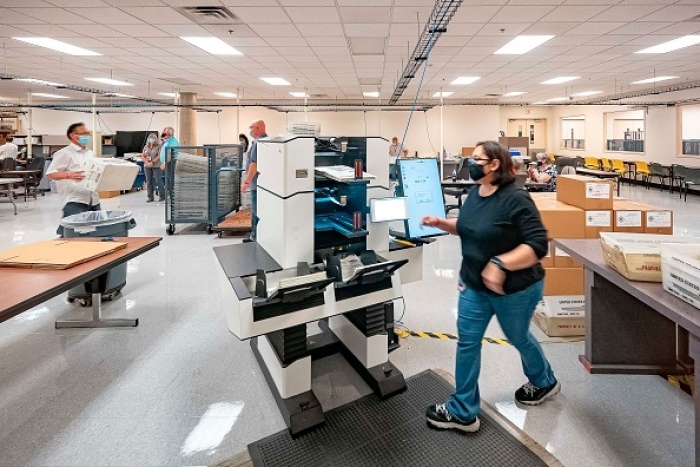 Ballots are counted at the Maricopa County Election Department Phoenix, Arizona, on November 5, 2020. (Photo by OLIVIER TOURON/AFP via Getty Images)

(CNSNews.com) - In June 2021, the U.S. Justice Department established the Election Threats Task Force to address what it called a sharp rise in reports of threats received by the election workers involved in the 2020 election cycle.

On Wednesday, a member of that task force, Assistant Attorney General Kenneth Polite, Jr., told the Senate Judiciary Committee that the task force reviews all reports of "threatening and harassing communications" directed at election officials, to see if criminal prosecution is "appropriate and permissible."

"It is important to bear in mind that the vast majority of communications directed at election workers, offensive though they may be, will not constitute true threats subject to federal criminal prosecution due to the robust protections afforded to political speech by the First Amendment," Polite said in his opening statement.

Some Republicans on the committee questioned the Justice Department's priorities in focusing on reported threats to election workers when so few of those reported threats lead to indictments, and when some of the cases could be handled at the state level.

Sen. Mike Lee (R-Utah) asked Polite why the Justice Department felt compelled to create a task force specifically to address threats to election workers, "when in a year you've gotten a thousand complaints, a hundred worthy of investigation, five worthy of prosecutions."

"And so it makes me wonder if the task force is necessary -- or necessary relative to other things,” Lee said. “The concern here is not that they're doing this task force. The concern is whether that task force will take away (from) other priorities or other crimes.”

For example, Lee mentioned unprovoked attacks on police officers as well as threats and unlawful protests outside the homes of Supreme Court justices.

“And if you've got a task force for this conduct, a task force receiving a thousand complaints, one hundred investigations, resulting in a total of five prosecutions, I would hope that you would have a few to look at violations of 18 USC Section 1507 (regarding protests at homes of Supreme Court Justices).

“I am highly concerned that this Department of Justice is politicizing the enforcement of justice,” Cruz said:

“You've discussed how there is a priority focused on elections, and I recognize that there is a political focus on that, although you told this committee that out of a thousand complaints, it's produced a total of five prosecutions, none of which involve violence and all of the five were based on threats.

“Serious threats of violence should be investigated and should be prosecuted,” Cruz said. And that includes actual violence against crisis pregnancy centers and churches that were vandalized following the Supreme Court ruling on abortion.

“Despite these very real threats and violent attacks against pregnancy centers, DOJ instead on July 12 set up a special, quote, Reproductive Rights Task Force, not to protect pregnancy centers, but instead to advocate the political agenda of this administration of expanding unlimited abortion on demand,” Cruz said.

“I have zero doubt that if pro-life supporters were vandalizing and firebombing abortion critics across the country, DOJ would declare it a national emergency. And you might well send out the National Guard.