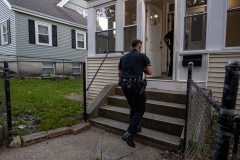 New guidance issued by the Justice Department instructs police officers how to respond, and literally what to say, to victims of gender-based violence, including drunks, prostitutes, and LGBT people. (File Photo by JOSEPH PREZIOSO/AFP via Getty Images)

(CNSNews.com) - The Justice Department on Monday released new guidance to help law enforcement agencies recognize and prevent "gender bias and other biases from compromising the response to, and investigation of, sexual assault, domestic violence and other forms of gender-based violence."

Among the eight basic principles, the guidance says law enforcement officers must "recognize and address biases, assumptions and stereotypes about victims; and treat all victims with respect," including prostitutes, LGBT people, women, racial minorities, prisoners, and drunks.

"At the Department of Justice, we know that investigating cases involving sexual assault and domestic violence is challenging – it demands thorough investigations and a careful effort to avoid unintentionally worsening the victimization for survivors of these crimes,” said Associate Attorney General Vanita Gupta.

"This guidance provides best practices that — when implemented into all levels of policy, training and supervision — help law enforcement provide services free from discrimination on the basis of gender, and therefore handle these cases more effectively."

Gupta said the guidance illustrates each principle with real-world examples showing "both what to do and what not to do."

Here are some of the "real-world examples" showing how a law enforcement officer's biases may impede an investigation:

-- "A young white woman enters a police station and reports that, 2 weeks earlier, she was raped at a house party by a colleague from work. The woman reports that she and the person who she says raped her had been drinking that evening. The police officer on duty asks how often the woman drinks excessively at house parties, and what she was wearing that night. The officer then tells her that she should really watch how much alcohol she consumes when she goes out at night, especially if she is getting dressed up.

-- "A tall Black man, in good physical condition and with no visible injuries, goes to the local police precinct and reports that his boyfriend, with whom he lives, has been sending him threatening texts and voice messages over the past several weeks. The man further reports that his boyfriend assaulted him the night before. The responding officer looks at the man skeptically and tells him that he’s not sure that he can take a report based on this information. The officer tells the man to think carefully about whether he has a crime to report and to come back another day if he still believes he needs assistance.

-- "A woman who has been known to engage in the commercial sex trade flags down a police officer who frequently patrols her neighborhood. She reports to the officer that she was just raped. The police officer on duty writes down her statement, but when he returns to the police station, he immediately classifies the complaint as “unfounded,” and takes no further action, because of the woman’s criminal history.

-- "A woman serving a prison sentence reports to law enforcement that a corrections officer sexually assaulted her while she was in isolation due to COVID-19. She saved the sheet on which the corrections officer ejaculated because she believes she will be discredited due to her custody status. The responding investigator tells the woman that her account makes no sense, and he does not know why she bothered saving the sheet.

-- "A woman reports that, while being transported to jail for a DUI arrest, the officer pulled over and put his mouth on her breasts, fondled her, and took a picture of her bare breasts with his cell phone. During a recorded interview of the woman, the investigator (who was the supervisor of the subject officer) lied about the state of the evidence, threatened to charge her with “slander,” and accused her of ruining a young officer’s career.

The guidance also includes a list of what officers should and should not say to complainants:

-- "Have you considered talking to the man and letting him know that you are upset?”

-- “Have you thought about how this is going to affect his scholarship/career/reputation?”

-- “Tell me what happened from start to finish.”

-- “I’m sorry but you are reporting an incident that occurred several months ago. There is nothing we can do at this point.”

-- “What did you think was going to happen after you went to his room alone?”

-- “What can you tell me about the person who did this?”

-- “What can you tell me about anything the person said before, during, or after the incident?”

-- “Can you tell me about any witnesses or people who might have seen the incident?”

-- “Did anything in particular cause you to come tell us about this incident today?”

-- “Have you received medical treatment? Would you like to go to the hospital?”

-- “I know that this question is difficult to answer and I want you to know I am only asking to get a clear picture of what you’ve experienced. I am very sorry about what happened to you and I do not think that you are responsible for it. Any questions I ask about alcohol or drug use by you or the offender I’m only asking to understand what happened.”

-- "[If it would not compromise the evidentiary value of the interview:] “Would you like an advocate to be present?”

-- “I’m sorry this happened, and I commend you for reporting it. Your health and safety are a priority. How can I support you?”