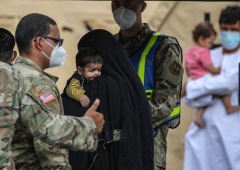 Both here and overseas, the U.S. military is housing tens of thousands of Afghan evacuees who are not yet vetted. (Photo by ARMANDO BABANI/AFP via Getty Images)

(CNSNews.com) - Spokesman John Kirby says the Defense Department, including Secretary Lloyd Austin, is "certainly aware" of problems, including sexual harassment and assault, at various military bases where tens of thousands of Afghan evacuees are staying until they are vetted (if they can be fully vetted).

The Washington Times reported on Wednesday that two Afghan men have been indicted on assault and sexual assault charges at Fort McCoy in Wisconsin.

A reporter noted that there are "thousands" of Afghan evacuees being held at Fort McCoy, "and apparently, there were problems with lack of food, clothing. Some of the women are being harassed by former Afghan soldiers. Members of Congress are asking Secretary Austin to investigate what's going on. Can you say if he's received that letter asking for the investigation and any sense of the way ahead?" the reporter asked.

"We're certainly aware of these reports," Kirby responded, "and we take it very, very seriously."

There are -- the -- especially in a place like Fort McCoy with winter coming on, and so, NORTHCOM is very mindful of the needs of the weather and the climate and making sure that the evacuees have a safe, clean, warm living environment while they continue this processing.

But we're mindful about this at all installations here domestically, that we have a responsibility to provide that kind of an environment for these individuals and their families to be able to subsist while they continue to work through the immigration process. And again, we're taking it seriously.

I know of no specific request today to conduct an investigation, but the secretary is certainly mindful of the reports. And he's comfortable that General VanHerck, the Northern Command commander, also is mindful of these issues and will continue to work closely with our interagency partners to alleviate any concerns there might be.

Kirby told the reporter that the military owns these bases "and so the military commanders are responsible for the facilities" where the Afghan evacuees are being housed:

We are also responsible for the environment, the physical environment, the housing and making sure that the food and water is provided; appropriate medical care if it's needed; recreation facilities and access to that kind of thing, particularly for the children; and, of course, appropriate religious accommodations.

That's what we're responsible for. The actual health of the individuals as HHS and DHS isn't responsible for the immigration process. And, of course, they're lashed up with state. So, it's truly an interagency team effort.

No one of us alone can or should be responsible for the totality of the mission. But our job is the housing and making sure that there's a safe environment, a safe and secure environment, for them to complete the processing.

Kirby also addressed a complaint that reporters are being denied access to the bases to check on the living conditions:

"There's no concerted effort to keep the press away," Kirby said.

In fact, just a week or so ago, there was a media day that we did at Fort Bliss. And we fully anticipated and hoped to conduct follow-on media days at the other installations, and then we got word of the measles outbreak.

And, as you know, we have frozen -- at the request of the CDC, we've frozen all other transportation out of overseas locations to the United States because of that out of due caution. And once we get past that, whenever that is, I fully expect that we will be able to restart media access to the facilities.

There was no desire to keep the press out for any reason. I think in the early weeks, we just wanted to make sure we had things in order that we were prepared to receive the numbers that we received. But we absolutely fully expect to be able, to provide access going forward. And that includes for members of Congress.

Clearly, they have a responsibility and a right to see these facilities too. But right, now visits are being postponed for health reasons.

“We urge your immediate attention to these troubling allegations, and ask that you conduct a thorough and comprehensive investigation and take other steps as necessary to ensure the safe and respectful treatment of those who are in the charge of your Department," they wrote.

The two lawmakers said they've received reports that individuals at Fort McCoy are:

“The balance [around 75 percent] is a combination...of Special Immigrant Visa applicants whose applications have not been finalized for approval; or locally employed staff who would qualify under, for example, P1, P2 (parolee) status. And then other vulnerable Afghans as you have identified, journalists, human rights activists, etc."