DHS Secretary: 'We Do Have a Robust Screening and Vetting Process' for Afghan Evacuees 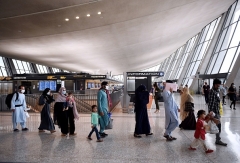 Afghan refugees arrive at Dulles International Airport on August 27, 2021 in Chantilly, Virginia after being evacuated from Kabul following the Taliban takeover of Afghanistan. (Photo by OLIVIER DOULIERY/AFP via Getty Images)

He noted that around 75 percent of the 60,000 people evacuated to the United States from Afghanistan so are are designated as "parolees," or vulnerable Afghans; they are not American citizens, green card holders, or special immigrant visa holders.

Portman asked Homeland Security Secretary Alejandro Mayorkas, "Does it concern you that we don't have in place a way to properly vet and handle these individuals, including allowing these individuals, you know, to walk off the military bases if they choose to do so, today?"

So we do have a robust screening and vetting process in addition to expertise both in the transit countries and here domestically to ensure the safety and security of the American people.

Portman wanted to follow up, but his time ran out for the first round of questioning.

In his remarks to Mayorkas, the senator expressed frustration that of the 60,000 evacuees brought to this country so far, about 6,500 (11 percent ) are American citizens; about 3,500 (just under 6 percent) are lawful permanent residents; and about 3,000 (5.5 percent) are people with visas, including SIVs.

Sen. Rick Scott (R-Fla.) asked Mayorkas how many Afghan refugees have been denied admission to the United States since August first:

"I don't have that number at my fingertips, but it's very de minimus," Mayorkas said.

Mayorkas added, "We have not found many people with derogatory information relative to those who qualify for admission to the United States by reason of their status."

Scott asked if the vetting does turn up problems, "how could you send them home?"

Mayorkas said there are "a number of options," including "seeking their voluntary return to a third country," or deporting them. "We would indeed seek their removal from the United States," he said.