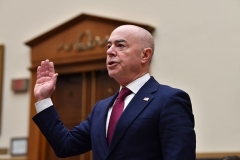 Department of Homeland Security Secretary Alejandro Mayorkas is defending his "Disinformation Governance Board," which he calls a "working group." (Photo by NICHOLAS KAMM/AFP via Getty Images)

(CNSNews.com) - In his opening statement to the Senate Homeland Security and Governmental Affairs Committee, Homeland Security Secretary Alejandro Mayorkas said the hearing "will provide me with an opportunity to address questions that some of you have posed regarding the department's Disinformation Governance Board."

Majorkas said the board is an "internal working group" that was "established with the explicit goal of ensuring that the protection of free speech, privacy, civil rights, and civil liberties is incorporated into all of the department's disinformation related work, which has been gone going for years across different administrations."

Sure enough, Mayorkas took many questions on what constitutes disinformation -- and what the working group will do about it. But he only gave a few examples.

Majorkas said the Mexican and Central American drug cartels "propagate disinformation that Title 42 does not apply to a particular community of migrants, migrants from a particular country...through social media. And what we do through US Customs and Border Protection is actually communicate via social media and other channels that that is false, that we do apply Title 42," Mayorkas told Sen. Rand Paul (R-Ky.).

Mayorkas said DHS gets involved "when disinformation poses a threat to the security of our country. It is when there's a connectivity to a threat to our country. It could be a threat, connectivity to violence. And what this -- what this working group does -- what this working group does is precisely what I would think you would want it to do, which is to take a look at the work -- the disinformation work that our department has done and ask the following questions. Do we have policies? Do we have guardrails?"

Mayorkas gave another example of disinformation, such as a someone sending the message, "Do not under any circumstances accept the vaccine at a FEMA-overseen vaccination center because they are actually peddling fentanyl. Now, should I sit back and take that or should I actually disseminate accurate information?" Mayorkas asked.

Paul argued that the "greatest propagator of disinformation in the history of the world" is the U.S. government -- the Pentagon Papers, WMD in Iraq, Iran-Contra.

"I mean, think of all the debates and disputes we've had over the last 50 years in our country. We worked them out by debating them. We don't work them out by the government being the arbiter. I don't want you governing guardrails. I want you to have nothing to do with speech," Paul said.

'Why should we not have suspicions'

Sen. James Lankford (R-Okla.) asked Mayorkas if there is a "written mission statement, a strategy document, principles, a charter, a job description on this Disinformation Governing Board? Are there written documents to explain what it is and what it is not -- what they're doing?"

Mayorkas said the charter and principles are "being developed."

Lankford said he wants to see those written documents as soon as possible, "because it's left undefined, we have no idea what this, is so we want to be able to get that."

"We don't have a definition of what it is," Lankford said. "We don't have boundaries of what it does. The FBI already does this. The State Department does this, and the person you tap to lead the disinformation campaign has been outspoken on TikTok and Twitter with disinformation, specifically on election issues. So we're responding to something that's unknown, and what we do know is disinformation is coming from it. Why should we not have suspicions on this?"

"That work has been underway for years and years," Mayorkas said. "What this group is (going) to do is to ensure that that work is performed in a way consistent with the law. It does not infringe on freedom of speech, rights of privacy, civil rights and civil liberties. It is going to establish what should have been established years ago; standards, definitions, guidelines and policies."

Sen. Josh Hawley (R-Miss.) noted that a DHS fact sheet defines disinformation as "false information spread with the intent to deceive or mislead."

"Yes, I believe that's the definition and broadly held," Mayorkas agreed, adding "when disinformation is a threat to the security of our homeland, then we are engaged."

Hawley mostly focused on Nina Jankowicz, the woman chosen to lead the Disinformation Board, noting that she's spread misinformation herself -- about the Hunter Biden laptop story and the bogus Steele dossier.

"Here's my question to you," Hawley told Majorkas: "If your intent was to combat misinformation online or in the government, why on God's green earth would you nominate someone who is a human geyser of misinformation?"

"Senator, I am ultimately responsible for the hiring of Ms. Jankowicz to be the executive director of the Disinformation Governance Board in my capacity as the Secretary," Mayorkas said.

"Why did you choose her?" Hawley asked again:

"I bear responsibility for that. I understand that she is an expert in disinformation," Majorkas said.

Mayorkas refused to discuss "the internal workings" of the DHS hiring process. He said the disinformation board "has not yet begun its work," and "the board has not met." And he did not commit to turning over documents regarding the board's composition: "Senator, we -- we owe you documents with respect to the work of this board that already are in existence," Mayorkas said.

"Here's the last thing I'll say on this, Mr. Secretary," Hawley concluded: "We have 2 million unauthorized migrants who crossed the border last year during the calendar year. We have 245,390 illegal crossings just this year in the Rio Grande Valley and your priority is setting up a board and hiring someone who has gone to TikTok to talk about stopping speech she doesn't like who has mocked voters, supporters of the last president.

"That has been your priority. To say that your priorities are misplaced, I think is a dramatic understatement. And the time has come I think Mr. Secretary for you to resign."