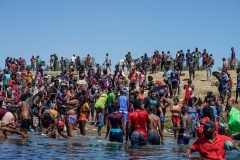 (CNSNews.com) - Homeland Security Secretary Alejandro Mayorkas on Sunday rejected the suggestion that the Biden administration is incentivizing foreigners to cross into the United States illegally by allowing so many of them to stay here.

Mayorkas also corrected "Fox News Sunday" host Chris Wallace, who said the situation is worse now than it was under Trump: "The statistics of your own department show that the flood of people coming illegally across the border has gotten worse under the Biden demonstration," Wallace said.

"So, I wouldn't call it a flood, if I may," Mayorkas responded.

"What would you call it?" Wallace asked him:

"But we -- we have seen large numbers of individuals encountered at our border making a claim for asylum, for humanitarian relief, which is a statute, which is a law of the United States that individuals can make a claim, a fear of persecution by reason of their membership in a particular social group, Mayorkas said. "That's what the law provides.

"This -- we are certainly seeing a large number here in this year, but in 2019, we saw a large number. In 2014, in 2010. This is nothing new. It spans many, many years. It spans different administrations of both parties, and it speaks to the need for legislative reform."

Wallace pointed to the shocking images of some 15,000 Haitians camped under a bridge in Del Rio, Texas last week, waiting for Border Patrol Agents to apprehend them. "Question, why didn't you stop them?" Wallace asked.

Wallace interrupted: "Why didn't -- why didn't you stop them from coming into the country?"

"We -- we did," Mayorkas claimed, contradicting the images Americans saw last week on television:  "We encountered them, they gathered -- they assembled in that one location in Del Rio, Texas, and we applied the laws. We applied the public health law under the CDC's authority, and we applied immigration law."

Wallace tried again: "My question is, why did you allow them in the country in the first place? Why didn't you build -- forgive me, a wall or a fence to stop them from walking -- this flood of people coming across the dam, it looks like a highway that allows them to cross the Rio Grande."

"It is the policy of this administration. We do not agree with the building of the wall. The law provides that individuals can make a claim for humanitarian relief. That is actually one of our proudest traditions."

Of the 30,000 Haitian migrants who did indeed "flood" into Del Rio since September 9, Mayorkas said "approximately" 12,000 already have been released into the United States and another 5,000 are still waiting to see if they can stay here or return to Haiti.

"If, in fact, someone is not expelled under the public health authority of the Centers for Disease Control, then they are placed in immigration enforcement proceedings. They have an opportunity to make their claim for relief to a judge as the law requires."

Wallace noted that many of those people will miss their immigration court hearings and will end up staying in the United States, some permanently.

Mayorkas said those who flout the enforcement guidelines "will be removed."

"And do you remove all of them, or some of them disappear into the country?" Wallace asked:

"Well, we -- it is our intention to remove them, that is what our policies are, and we deploy our enforcement resources according to certain priorities to ensure the safety and security of the American people."

Asylum-seekers ‘most certainly’ are welcome in U.S.

Mayorkas told CNN's "State of the Union" that asylum-seekers are welcome in the United States:

Host Jake Tapper asked him, "Do you think that asylum seekers who are fleeing violence, fleeing political instability, fleeing natural disasters, are they welcome in the United States?"

“We are rebuilding our immigration system. We are rebuilding humanitarian, safe and orderly pathways for individuals to make their claims here in the United States. We are also applying the law. In this case, it is a public health law to protect the American public, communities and the migrants themselves."

Tapper asked Mayorkas to clarify: "Mr. Secretary, did I just hear you say that, if Title 42, I believe it's called, the -- which allows -- it's the health initiative, health imperative that allows (CDC) to expel individuals because of COVID...So, if the Biden administration rescinded it...that would be fine with you?"

"Yes, so, the CDC makes its determination, as experts, on behalf of the public's well-being from a health perspective. If they determine that the public health imperative no longer exists, and Title 42, which is a statute, is a law need not be applied to protect people, then it will not be applied any longer.

"And we will -- and we will proceed accordingly."

Right now, Title 42 is all that is keeping some illegal immigrants out of the country.