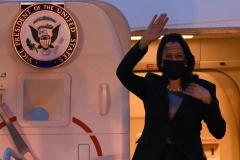 Harris is traveling to El Paso on Friday, but the real crisis is 800 miles way near McAllen, Texas:

"You know, first of all, I'm glad she is going down to the border because that is part of her job portfolio, number one," Cuellar told Fox News on Thursday.

"And number two, yes, the epicenter is down there in the Lower Rio Grande, the lower part of my district down there. If you look at the numbers that are down there compared to El Paso, you are not going to get a true picture of what's happening. You go to the Donna facility, you go to Roma, Texas, you go to Rio Grande City, you go to the McAllen area so you can get an idea. That's how you can get an idea of what's happening down at the border. So it's a first step."

Cuellar said by making the trip, Harris finally will be able to say she's been to the border. But it won't stop the criticism coming her way:

"Yesterday I got a call from one of my Border Patrol friends and say, hey, why is she going over there? We got a 140 percent higher crossings over here. This is where the activity's at. And I couldn't answer him when he asked me that question," Cuellar said.

"He is down there in the Lower Rio Grande. Even if she goes to El Paso, which is a first step, she's got to spend time with landowners, with stakeholders, with cities, the counties, officials. And I hope she sits down with our brave men and women in green and in blue, our Border Patrol agents, so they don't just get a pat on the back, but they actually get some reinforcement and some support down there."

Harris has been under pressure to visit the border ever since President Joe Biden, on March 24, announced that she would lead his administration's efforts to stem migration to the southern border. Biden said Harris would "lead our diplomatic effort" in working with other nations "to accept the returnees and enhance migration enforcement at their borders."

Cuellar said Harris is going to El Paso, "a beautiful place," because "her planners told her that if you're going to go down to the border, go to something that is safer to go to, politically safer. If you go down to the Lower Rio Grande with the high activity and you are there with kids and families, prosecutorial discretion where people are being released, high numbers of people crossing the border, you know, politically it's harder to do that.

"I know that. I mean, that's part of my district. But you have to do what you have to do. You just can't just go to one place. But she does do the check-the-box and go down to the border by going to El Paso."

Cuellar said Harris never responded to his invitation to join him in the border communities he represents in the lower Rio Grande Valley, including McAllen.

Nor did Cuellar get advance notice of Harris's planned visit: "We heard about it from the news like everybody else. In fact, I talked to some other Texas Democrats, they had no idea until they saw it in the news. So again, it doesn't matter if it's a Democrat or Republican, you got to pay courtesy to the members of Congress that are down there at the border."

Since El Paso is many hundreds of miles away from Cuellar's district, he said he doubts he'll be invited to accompany Harris tomorrow.