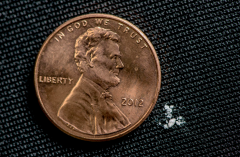 A lethal dose of fentanyl as photographed by the DEA.

(CNSNews.com) - The Drug Enforcement Administration says it is seeing a "nationwide spike in fentanyl-related, mass-overdose events involving three or more overdoses" occurring around the same time in the same location.

"In just the past two months, there have been at least seven confirmed mass-overdose events across the United States resulting in 58 overdoses and 29 overdose deaths," DEA Administrator Anne Milgram wrote in an April 6 letter to local, state and federal law enforcement partners. "Many of the victims of these mass overdose events thought they were ingesting cocaine and had no idea that they were in fact ingesting fentanyl."

Milgram is urging law enforcement at all levels to contact DEA immediately if a mass-overdose event happens in their jurisdictions.

"At DEA, we are working to trace mass-overdose events back to the local drug trafficking organizations and to the international cartels that are responsible for the surging domestic supply of fentanyl," she said.

The DEA's warning and call to action comes as the Biden administration has set a May 23 date for lifting Title 42, the COVID-related public health measure that is keeping some would-be border jumpers out of the country. Even Biden administration officials admits that lifting Title 42 will accelerate the ongoing surge of illegal immigration, which includes drug traffickers.

But on Wednesday, Health and Human Services Secretary Xavier Becerra rejected a call by Republicans to use Title 42 as way of keeping at least some fentanyl out of the country under the guise of public health.

Rep. Michael Burgess (R-Texas) asked Becerra at a committee hearing, "Is there a public health emergency posed by the rampant importation of fentanyl across our southern border? What is the number one cause of death from people 18 to 48 right now?"

Becerra responded, "What I can tell you is that there is clearly a crisis going on when it comes to drug overdose and drug use...I will tell you as well that the Title 42 provisions that you mentioned deal with public health in a particular way. It deals mostly in terms of quarantine.

"It is different from the public health emergency declaration that is based on different law, but in both cases, they're premised on the health of the country and the health of particular communities. They're not based on immigration standards."

"But here's the problem," Burgess told Becerra. "The danger to the American people is substantial, and the numbers are going to be staggering. Cuts in border protection, DHS personnel on the border will be distracted by the large numbers of people that are just simply flooding across the border, leaving open the possibility for the vast importation of drugs, predominantly fentanyl, which is so terribly deadly.

"And we almost can't keep up with it. It is a true public health emergency. If there were a time to enact or to keep Title 42, it would be because of this fentanyl crisis. And I hope you will look into that," Burgess said.

In her letter to law enforcement, DEA's Milgram said fentanyl is driving the nationwide overdose epidemic. She pointed to CDC estimates showing that in the 12-month period ending in October 2021, more than 105,000 Americans died of drug overdoses and more than 66 percent of those deaths were related to fentanyl and other synthetic opioids.

Milgram said DEA agents are trained to deal with fentanyl overdoses, and they stand ready to assist local law enforcement by:

-- Interdicting the substance that is driving the spike in overdoses;

-- Investigating and identifying the dealers and larger drug trafficking organizations responsible for the overdose event;

-- Providing priority access to all of DEA’s resources, including our labs, chemists, and overdose subject matter experts;

-- Assisting with federal prosecution; and

-- Warning the public about the lethal drug threat.

In her letter, Milgram also described some of the recent mass overdose events in the United States, as follows:

-- On March 10, 2022, 6 individuals overdosed at a rental property in Wilton Manors, Florida after being exposed to a substance that they believed was cocaine, but contained fentanyl.

-- On March 4, 2022, 21 individuals overdosed, 3 of whom died, at a homeless shelter in downtown Austin, Texas after ingesting crack-cocaine and methamphetamine laced with fentanyl.

-- On March 3, 2022, 3 individuals overdosed and died in a hotel room in Cortez, Colorado after ingesting what that they believed were 30mg oxycodone pills, but which were in fact fake prescription pills containing fentanyl.

-- On February 20, 2022, 6 individuals overdosed, 5 of whom died, in the same apartment in Commerce City, Colorado after ingesting a substance that they believed was pure cocaine, but was in fact pure fentanyl.

-- On February 6, 2022, 4 individuals overdosed, 2 of whom died, in the same apartment complex in Omaha, Nebraska after ingesting a substance that they believed was cocaine, but contained fentanyl.

-- Between February 5-7, 2022, 8 individuals overdosed, 7 of whom died, at an apartment complex in St. Louis, Missouri after ingesting crack-cocaine laced with fentanyl.

-- On January 28, 2022, 10 individuals overdosed, 9 of whom died, within the same city block in Washington, D.C., after ingesting crack-cocaine laced with fentanyl.

DEA noted that fentanyl, a synthetic opioid, is highly-addictive, found in all 50 states, and drug traffickers are increasingly mixing it with other types of drugs -- in powder and pill form --in an effort to drive addiction and attract repeat buyers.

Illicit fentanyl is primarily manufactured in foreign labs, many of them in China, and smuggled into the United States through Mexico.

Milgram told local, state and federal law enforcement officials they should "assume that all drugs encountered during enforcement activities now contain fentanyl," and they should take precautions to avoid the drug's extreme toxicity.

Just two milligrams of fentanyl is considered a lethal dose.