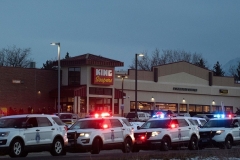 Police vehicles outside the King Soopers grocery store in Boulder, Colorado where a man opened fire on shoppers, killing ten, on March 22, 2021. (Photo by JASON CONNOLLY/AFP via Getty Images)

(CNSNews.com) - Sen. Ted Cruz said on Tuesday he's been to the scene of too many mass shootings, in Texas alone -- at Santa Fe High School, in El Paso, in Dallas, in Sutherland Springs.

"I've been to too damn many of these," Cruz said. But taking guns away from law-abiding citizens is not the answer -- it would make crime worse, he insisted:

And every time there is a shooting, we play this ridiculous theater where this committee gets together and proposes a bunch of laws that would do nothing to stop these murders.

Cruz said Sen. Blumenthal is wrong to say that Republicans have no solutions. Cruz noted that he and Sen. Chuck Grassley (R-Iowa) introduced legislation in 2013 targeting felons, fugitives, and those with serious mental problems “to stop them from getting firearms, to put them in prison when they try to illegally buy guns.”

What happen in this committee after every mass shooting is Democrats propose taking away guns from law abiding citizens, because that's their political objective. But what they propose -- not only does it not reduce crime -- it makes it worse.

The jurisdictions in this country with the strictest gun control have among the highest rates of crime and murder. When you disarm law abiding citizens, you make them more likely to be victims. If you want to stop these murders, go after the murderers.

The Grassley-Cruz bill came to a vote on the floor of the Senate in 2013 and got 52 votes, a majority in a Democrat-run Senate. Nine Democrats voted for it, giving it the "most bipartisan support" of any comprehensive legislation, Cruz noted. But it failed to pass because Democrats filibustered the law to prevent its passage.

“If Grassley-Cruz had passed into law, Sutherland Springs very likely would not have happened,” Cruz said.  He noted that the murderer in that case had a conviction that would have disqualified him from buying a gun, but the Air Force failed to report it to the national background check system.

Cruz said his bill would mandate an audit to make sure felony convictions are entered into the background check system.

Cruz also criticized the Justice Department for its "long" and "indefensible practice” of failing to prosecute felons and fugitives who try to buy guns.

Cruz said the only way to prevent mass shootings is to lock up “gun criminals” who try to illegally buy guns:

And we will learn in the coming days and weeks the exact motivation of the murderers in Atlanta and Boulder, Colorado.  We'll learn what happened there. But we already know this pattern is predictable, over and over and over again.

There are steps we can take to stop these crimes.  And you know what the steps aren't? The steps aren’t disarming law abiding citizens. Every year, firearms are used in a defensive capacity to defend women, children families roughly a million times a year in the United States.

And the Democrats who want to take away the guns from those potential victims would create more victims of crime, not less.

Cruz said he agrees that “it's a time for action.”

He announced that he and Sen. Grassley are reintroducing their bill, and he asked his Democrat colleagues "not to participate again in the shameful filibuster that this body engaged in in 2013."

“Let's target the bad guys, the felons, the fugitives and those with mental disease -- let's put them in jail, let's stop them from getting guns. Let's not scapegoat innocent, law-abiding citizens, and let's not target their constitutional rights,” Cruz said.