Cruz: ‘Biden Administration Has Over 16,000 Children in Custody. We Went and Toured the Biden Cages’ 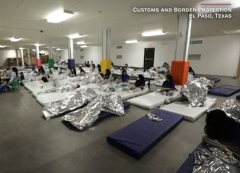 A still frame from video of a migrant child holding pen released by U.S. Customs and Border Protection. Compare this view with the one below posted by Sen. Ted Cruz (R-Texas) (Photo: Screen capture)

(CNSNews.com) - Sen. Ted Cruz (R-Texas) joined some of his Republican colleagues on a tour of the Southwest border on Friday, getting a first-hand look at the jam-packed housing for thousands of unaccompanied children who continue pouring into the United States, welcomed by President Joe Biden and his administration as they prioritize "humanity" over border security.

"We spent a day-and-a-half down at the border," Cruz told "Sunday Morning Futures" with Maria Bartiromo:

And I will tell you, it is bad. I have been to the border many, many times. It is the worst that I have ever seen. It is a full-blown crisis. Last month, the month of February, we had over 100,000 illegal aliens crossing over. Roughly 30,000 of them were unaccompanied minors, kids.

And just today, the Biden administration has over 16,000 children in custody. We went and toured the Biden cages. For four years, we heard Democrats and the media talking about kids in cages under President Trump. Joe Biden has built more cages. The cages are bigger and they're more full.

The Donna facility, where that video you just showed was taken, the Donna facility is this giant tent city that they have built. It's massive. It's designed to hold 1,000 people. But under COVID restrictions, its capacity is 250. It right now has over 4,000 people in it. It is at a 1,500 percent capacity.

And in that facility, the children there are testing positive for COVID at roughly a 10 percent rate. So, they're locking them in these cages where COVID in a pandemic is a real risk. It is inhumane. It is unconscionable. And it's the direct result of the political decisions that Joe Biden has made.

Cruz said human smugglers get up to $6,000 for each person they bring across the border:

We are seeing an instance of more and more young males arriving with kids. When those kids are DNA-tested against those males, many of those males are not related to those kids. And what the cartels are doing is, they understand the weakness and the loopholes in the Biden administration's policy.

And if a young adult male, possibly a criminal, possibly a gang member, if they want to come into this country, all they have to have is a kid. And so we're seeing the cartel members renting kids, renting babies, renting little children. Of course, many of those kids then are physically abused or sexually abused.

And they're seeing those kids then coming multiple times with multiple different adults. It is tragic. And, Maria, it's one of the things that's frustrating, because many Democrats like to pretend their open border policies are somehow humane.

There is nothing humane about what Joe Biden and Kamala Harris are doing at the border. They're subjecting kids to horrific abuse. They're endangering their lives in a pandemic by keeping them locked up in cages right on top of each other. And then they're releasing illegal aliens into the United States who are testing positive for COVID at a rate seven times higher than the U.S. population. This is a humanitarian crisis. It is a health crisis. And it's a national security crisis.

Cruz faulted President Biden for stopping construction of the border wall, allowing illegal traffic to flow through the holes. Biden also reinstated the failed "catch and release" policy that allows people to stay here pending their immigration hearings, for which they do not show up.  And Biden ended the "remain in Mexico" policy that required would-be asylum seekers to apply for U.S. asylum in Mexico. That Trump policy discouraged people from flocking to the border.

"The Biden team knew this," Cruz said. "But their politics forced them to make a decision that is now resulting in massive human suffering and tragedy. And they don't know what to do, because their politics won't let them change. And so this is getting worse every day."

Cruz said Democrats are encouraging illegal immigration believing the foreigners, many from Central America, will eventually become U.S. citizens and vote for Democrats.