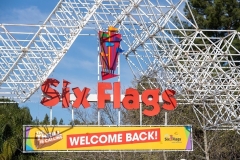 A sign at the entrance of the theme park Six Flags Magic Mountain welcomes the public back on the day of the park's re-opening, April 1, 2021, in Valencia, California. (Photo by VALERIE MACON/AFP via Getty Images)

(CNSNews.com) - As more cities and states reopen, the number of jobs created and the number of employed Americans continues to substantially increase.

In March, according to the Bureau of Labor Statistics, the economy added a whopping 916,000 jobs, compared with +468,000 (revised) in February.

At the same time, the number of unemployed Americans also dropped by 262,000 to 9,710,000, pushing the unemployment rate down two-tenths of a point to 6.0 percent. That's less than half of the record 14.8 percent unemployment rate set a year ago April.

In March, the civilian non-institutional population in the United States was 261,003,000. That included all people 16 and older who did not live in an institution, such as a prison, nursing home or long-term care facility.

Of that civilian non-institutional population, 160,558,000 were participating in the labor force, meaning they either had a job or were actively seeking one during the last month. This resulted in a labor force participation rate of 61.5 percent in March, a tenth of a point higher than February and a move in the right direction.

Among the major worker groups, the unemployment rate for Asians rose to 6.0 percent in March, following a decline in the previous month. The jobless rate for Hispanics edged down to 7.9 percent over the month, while the rates for adult men (5.8 percent), adult women (5.7 percent), teenagers (13.0 percent), Whites (5.4 percent), and Blacks (9.6 percent) changed little.

'State of our labor market'

In a February 10, 2021 speech to the Economic Club of New York, Federal Reserve Chairman Jerome Powell discussed the "state of our labor market."

He said the unemployment rate during COVID -- as published by BLS -- has "dramatically understated the deterioration in the labor market."

"Most importantly, the pandemic has led to the largest 12-month decline in labor force participation since at least 1948.  Fear of the virus and the disappearance of employment opportunities in the sectors most affected by it, such as restaurants, hotels, and entertainment venues, have led many to withdraw from the workforce. At the same time, virtual schooling has forced many parents to leave the work force to provide all-day care for their children.”

In addition, Powell said, the Bureau of Labor Statistics reports that many unemployed individuals have been misclassified as employed. If those misclassifications were corrected, the unemployment rates of recent months would be closer to ten percent, he said.

Powell noted that the unemployment rates for Blacks and Hispanics have risen significantly more than for whites since February 2020. "As a result, economic disparities that were already too wide have widened further," he said.

"Since the onset of the pandemic, we have been concerned about its longer-term effects on the labor market. Extended periods of unemployment can inflict persistent damage on lives and livelihoods while also eroding the productive capacity of the economy."

Returning to full employment will not be easy, Powell said, indicating that it will happen only after the pandemic ends.

Even then, he said, struggling workers and households are likely to need continued support. "The same is true for many small businesses that are likely to prosper again once the pandemic is behind us."

Powell said the Federal Reserve is "strongly committed to doing all we can” to promote maximum employment.

But the effort goes beyond the Federal Reserve, he added:

Given the number of people who have lost their jobs and the likelihood that some will struggle to find work in the post-pandemic economy, achieving and sustaining maximum employment will require more than supportive monetary policy. It will require a society-wide commitment, with contributions from across government and the private sector.

The potential benefits of investing in our nation's workforce are immense. Steady employment provides more than a regular paycheck. It also bestows a sense of purpose, improves mental health, increases lifespans, and benefits workers and their families.

I am confident that with our collective efforts across the government and the private sector, our nation will make sustained progress toward our national goal of maximum employment.