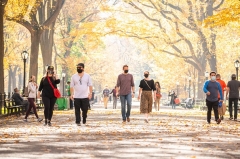 (CNSNews.com) - The federal Centers for Disease Control and Prevention counts a total of 9,913,553 COVID cases in this country since January, with 105,142 new cases reported on Monday alone.

The six states with the highest positivity rates at the moment are North Dakota, South Dakota, Iowa, Wisconsin, Nebraska and Wyoming.

As the number of COVID cases escalates, deaths are nowhere near the record set in mid-April.

The chart below shows that since the record number of deaths in mid-April, the number drifted lower until early July, when the death count rose for five straight weeks to a second peak of 8,199 for the week ending August 1. Then followed nine weeks of decline until another uptick in early October, which may continue into November.

Because death certificates are submitted to NCHS on a rolling basis, the death count for recent weeks is likely to increase more significantly than the count for more distant weeks. It appears that the higher number of cases reported in recent weeks may result in an increasing number of deaths heading into the holiday season.

'We are still facing a dark winter'

Democrat Joe Biden on Monday said he and "Vice-President Elect Harris...are ready to get to work to address the needs of the American people."

He said number one on his list is "doing everything possible to get the COVID-19 under control so that we can reopen our businesses safely and sustainably, resume our lives, put our--put this pandemic behind us."

Biden hailed the "positive news" that Pfizer appears to have produced a COVID vaccine that is 90 percent effective, based on preliminary findings.

"At the same time it's clear that this vaccine, even if approved, will not be widely available for many months yet to come...And so there's a need for bold action to fight this pandemic."

According to Biden, "We are still facing a very dark winter. There are now nearly 10 million COVID cases in the United States and last week we topped 120,000 new cases on multiple successive days. Infection rates are going up, hospitalizations are going up, deaths are going up [but remain well below the peak -- see chart].

Biden on Monday named a COVID-19 Transition Advisory Board to advise him on a "blueprint" he can put in place as soon as he is sworn into office.

"The bottom line -- I will spare no effort to turn this pandemic around once we are sworn in on January 20, to get our kids back to school safely, our businesses growing, and our economy running at full speed again and to get an approved vaccine manufactured and distributed as quickly as possible to as many American--to as many Americans as possible free of charge, and we will follow this science, we will follow the science."

Biden implored Americans to wear masks in public, calling it a "good way to start pulling the country together."