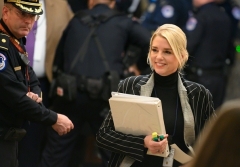 So our team of 15 people will be headed in right now to observe the vote-counting process. This is very important because, as you know, they have kept us away -- 30 to 50 to 100 feet. They had a guy in there wearing a badge that's not a sworn law enforcement officer, keeping people away.

This is not a matter for the secretary of state or supervisor of elections. The U.S. Constitution and the legislature -- under the U.S. Constitution, the Legislature has the right to make these laws, which they have made, and a judge just confirmed they must be followed.

So we plan on entering that building right now and observing the voting process. If there is one illegal vote that is cast, it takes away from the great men and women of Pennsylvania who came out and issued a legal vote.

Protesters outside the center cranked up the music in an apparent attempt to drown out Bondi, who kept her remarks brief.

Trump tweeted on Wednesday: "Our lawyers have asked for 'meaningful access', but what good does that do? The damage has already been done to the integrity of our system, and to the Presidential Election itself. This is what should be discussed!"

Trump also is asking the U.S. Supreme Court to exclude mailed ballots that come in after Election Day.