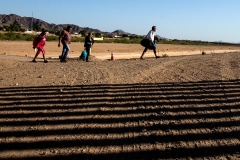 Migrants from Colombia cross the border in Yuma, Arizona. (Photo by RINGO CHIU/AFP via Getty Images)

(CNSNews.com) - Instead of forcing would-be asylum-seekers to remain in Mexico, as the courts have ordered, the Biden administration has been videotaped shipping dozens of adult male illegal border-crossers to the interior of this country.

"That is in direct, direct violation of the court's order," Sen. Tom Cotton (R-Ark.) told Fox News's Laura Ingraham Tuesday night. "I hope the court holds them accountable. I hope they hold Secretary, DHS Mayorkas, accountable for this."

Ingraham asked Cotton: "If they keep doing what they do, which is not enforce the law, America is essentially changed in profound ways going forward, maybe forever. So do you discount the possibility that the House could actually bring up a serious -- perhaps impeachment inquiry just on this issue of the border alone? Is that out of the realm of possibility?"

"No, Laura, I don't think it's out of the realm of possibility, because of all of the abuses of the Biden administration, I think what the Department of Homeland Security has done to undermine American sovereignty, to open our borders, to undercut wages and jobs for American workers is probably the most egregious," Cotton said.

"And they're open about it. Secretary Mayorkas has said it in speeches, that being illegally present in the country is no longer even a priority for deportation. They admit these things publicly."

Homeland Security Secretary Alejandro Mayorkas plans to visit the (wide open) border in Yuma, Arizona, on Wednesday. His visit follows news that U.S. Customs and Border Protection "encountered" 178,840 illegal border crossers in December, the highest number ever for that month.

"Your tax dollars are supporting single grown men crossing this border and being shipped wherever they want to go," Cotton said Tuesday night. "That is a far cry from what that federal courts have ordered the Biden administration to do, which is to re-implement President Trump's remain in Mexico policy.

"I was shocked by the Biden administration's response to it. They said that they sometimes help with the orderly processing to get these migrants to their final destination. Well, Laura, when someone crosses our border illegally, their final destination should always be turning them around and sending them back to their home country. It shouldn't be putting them on a bus or an airplane at taxpayer expense to go wherever they want in the United States."

At the White House press briefing on Tuesday, Fox News White House Correspondent Peter Doocy asked Jen Psaki, "Why is it that large numbers of single adult men are being released into the United States just hours after being apprehended at the southern border?"

"Well, I'm not sure the specifics of what you're referring to, Peter," Psaki replied:

What I can tell you in terms of what our policy is and how we're approaching the border is that we continue to be under Title 42. Migrants who cannot be expelled under Title 42, are placed into immigration proceedings. And one of those avenues could be placement in an alternative to detention program in the interior of the United States.

Sometimes that means moving migrants to other parts of the United States to move to different detention facilities where they wait for next steps in the immigration process such as a court hearing and are required to check in with a local ICE office.

So that is something -- certainly something that is happening out there in the country and is consistent with our policy.