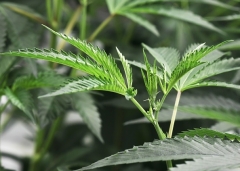 (CNSNews.com) - Attorney General Merrick Garland told a California lawmaker on Tuesday that large, illegal, transnational marijuana-growing operations in the California desert "are certainly within our jurisdiction and within our scope of concern."

Rep. Mike Garcia (R-Calif.) issued a plea for help in dealing with what he called "a massive influx of an illegal marijuana industry" in the deserts north of Los Angeles:

Garcia said the problem is being "understated at local levels, at the state levels, and certainly not appreciated at the federal level."

"I've been able to take a tour with the local law enforcement agencies to see it from the air, and I can tell you firsthand that -- if you remember the first time you went flying over a small neighborhood your reaction was probably, wow, I can't believe there's this many pools in our neighborhoods. I have the same--I had the same reaction when I toured our Antelope Valley area with regards to these illegal pot operations," Garcia told Garland.

"There are literally hundreds, if not thousands, of these greenhouses being propped up in our deserts in areas where, frankly, vegetation should not be growing. It's difficult to farm out here," Garcia continued:

What's happening is, we have folks who are operating illegally on a black market who are stealing natural resources. They're stealing water. In many cases, the folks working these illegal pot operations are indentured servants, illegally here, trying to make ends meet and being taken advantage (of).

We have folks being--local citizens being intimidated by some of these transnational criminal organizations that are running these illegal marijuana operations. The magnitude of this problem is staggering, and I know that the federal government--I know that DOJ under DEA has pots of money that do go towards eradicating these illegal marijuana operations, but it is at a magnitude, like I said, that's beyond comprehension, I think. And I really do believe it's worth the DOJ's attention, not only at the federal level, but also in support of the local law enforcement agencies.

My question is, is what, in your opinion, can be done from a federal level to help prosecute folks who are growing marijuana illegally? There's a series of charges that have been deemed really misdemeanors, the distribution, the sale. The growing of marijuana in California is treated as misdemeanors, but the stealing of natural resources, in some cases the squatting on land, the intimidation against local residents for reporting...is rising to a level of felony behavior, and, frankly, it is a true security issue at the local level, but also national security.

What do we do at the federal level under your administration and your leadership to help us eradicate the illegal marijuana problem?

Garland said he's not "precisely familiar with the specifics," adding that DOJ's view on marijuana use is that "enforcement against use is not a good use of our resources. I understand that's not what you're talking about," Garland said.

"You're really talking about growing and manufacturing at a large scale...So to the extent you're asking, for example, about transnational operations of large amounts coming from Mexico or of transnational operators who are coming into the United States to do the growing, these are certainly within our jurisdiction and within our scope of concern."

Garcia told Garland he'd "love to host you out here" to see the "staggering" problem he's talking about.

"The local law enforcement agencies get about $19,000 per year from the federal government for over time to help fight this. They hit that cap, that $19,000 limit usually in June or July of each year and it's frankly, not enough," Garcia said.

"And like I said, this is--we've had seven dead bodies show up at these illegal growers here in Southern California just in the last few months. Would really appreciate hosting you out here and getting not only the DEA, but also ATF and FBI representatives to see firsthand what we're seeing on the ground here."

Later, in a second round of questioning, Garcia noted that the illegal operations he's talking about are not taxed or regulated, as California's legal cannabis industry is.

"These are, in Southern California, very large scale nurseries being put up in the middle of our desert. They are literally stealing water out of fire hydrants and out of California's aqueduct system. They are, in some cases, stealing land and squatting on this--this--these desert properties. And in many cases, over 90 percent of them using free labor in the form of indentured servants from people who are here illegally and don't have an ability to go to police, like--like most employees would have.

"So this is truly a threat. It's a national security threat. It's an international threat. It's a domestic threat. And I--and I--I would really welcome you to send a delegation out here to see it firsthand," Garcia repeated.

Garland said he would "speak to the DEA about this...and see what they know about the circumstances that you're describing.

"They certainly--the way you're describing them, of course, and plus, you've mentioned, I think, seven dead bodies being found. A combination of large scale illegal activity, violence, indentured servitude, none of those are things that we should be ignoring. So I will--I will be sure that the DEA looks into this."