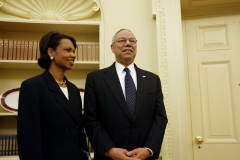 "I'm not advising the president," Rice told CBS's "Face the Nation" with Margaret Brennan. "But if I were, I would say, let's put tweeting aside for a little bit and -- and talk to us. Have a conversation with us. And I think we need that. And I think he can do it."

Brennan asked Rice what she would advise Trump to do:

I would ask the president to, first and foremost, speak in the language of unity, the language of empathy. Not everyone is going to agree with any president, with this president. But you have to speak to every American, not just to those who might agree with you.

And you have to speak about the deep wounds that we have. And that we're going to overcome them. I've heard the president talk about the resilience of Americans. I'd love to hear more of that.

Twitter and tweeting are -- are not great ways for complex thoughts, for complex messages. When the president speaks, it -- it needs to be from a place of -- of thoughtfulness, from a place of having really honed the message so that it reaches all Americans.

Brennan invited Rice to criticize Trump, asking her about his tweet, "when the looting starts, the shooting starts."

But Rice steered a neutral course:

"The president, obviously, the shooting and looting, he said that he didn't know that historical context. And so I would say, think about the historical context before you say something because it is a deep wound.

"And the presidency is special in that regard. People look to the Oval Office, as we've looked to the Oval Office throughout our history, for -- for messages, for signals. And as I said, the president has used some language that I am really very -- very much admire, like the resilience of the American people. Just be careful about those messages.

"I'm not advising the president. But if I were, I would say, let's put tweeting aside for a little bit and -- and talk to us. Have a conversation with us. And I think we need that. And I think he can do it."

Well, look, I have enormous respect for Jim Mattis and he's a man of great integrity. He's a patriot. He's my friend. And he spoke to something that he needed to speak to. What I want to speak to is the future. And what we do here over the next several months.

We are having protests that need to be peaceful. But we've always moved ahead, in part by protest. There's no excuse for the criminality and for the looting. That's not what -- who we are and what we are.

But I will tell you, as somebody who grew up in Birmingham, Alabama, Jim Crow Alabama, when if a black man was shot by a policeman, it wouldn't have even be a footnote in the newspaper -- I'm really grateful to people who are going out now and saying, no, that is not acceptable.

I'm grateful to those people who are thinking about how to support good police, who are thinking about how to support all of those people who put their lives on the line every day to protect us, but also to say to those who do not have our best interest at heart, who don't undertake that obligation to protect and defend without regard to color, enough. We won't put up with that either.

Rice's predecessor as Secretary of State, Colin Powell, told CNN's "State of the Union" on Sunday that President Trump has "drifted away" from the Constitution.

"And the one word I have to use with respect to what he's been doing for the last several years is a word I would never have used before, I never would have used with any of the four presidents I have worked for: He lies. He lies about things. And he gets away with it, because people will not hold him accountable."

Powell said he will vote for Joe Biden, which isn't a surprise, since Powell endorsed Barack Obama when he ran for president.