Comer: Hunter Biden Lived at Joe Biden's House and 'Paid for a Lot of Living Expenses' 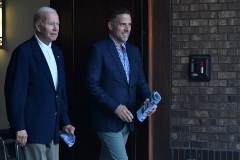 President Joe Biden and his son Hunter Biden attend mass at a Catholic Church in South Carolina on August 13, 2022. (Photo by NICHOLAS KAMM/AFP via Getty Images)

This is the same house in the Wilmington, Delaware area where classified documents were found stored in a garage and in Joe Biden's library.

Not only did Hunter live with his father: "We know Hunter Biden paid for a lot of living expenses at Joe Biden's house, which -- that in itself is a problem that Joe Biden's going to have to answer to in the future," Comer told Fox News Monday night.

Comer isn't the only one who's concerned about Hunter Biden's potential access to top secret documents found at the Wilmington house. On Sunday, John Ratcliffe, the former director of national intelligence under President Donald Trump, noted that "we don't even know" all the places the classified documents may have been in the six years that Joe Biden kept them in unsecured locations:

"And we also know one of the places they went was either owned or rented by a drug addict by the name of Hunter Biden, whose associates during part of this period of time included prostitutes, Ukrainian oligarchs and business associates from communist China," Ratcliffe told "Sunday Morning Futures."

"We know that Hunter Biden had business associates that worked for the CCP [Chinese Communist Party]; we know that he had a business associate that was considered the head spymaster for the CCP; we know that, as Ratcliffe said, he was involved with some less than stellar people from Ukraine, from Russia, and, you know, we believe that Hunter Biden is a national security risk," Comer said.

"So to know that they were just, you know, these documents were laying around the house, in the garage, in the living room, I don't know if they checked the glove compartment or not in that Corvette but I hope they do.

"I mean, this is very concerning, and this is another reason why the Republican leadership should have already been briefed on the severity of what those documents were that were in possession at the Biden house."

Comer said the only reason we even know about the classified documents found at Biden's Wilmington-area home is because a CBS reporter found out about it:

"The White House was never going to tell us about this," Comer said. "This was going to be another one of many cover-ups with Joe Biden," he added.

"Disgraced first son Hunter Biden lived off and on at the Delaware home where classified documents from Joe Biden’s time as vice president were found last month — giving him unrestricted access to America’s secrets while he was addicted to drugs, hammering out shady foreign business deals and under federal investigation.

"The now-52-year-old began listing the Wilmington home as his address following his 2017 divorce from ex-wife Kathleen Buhle — even falsely claiming he owned the property on a July 2018 background check form as part of a rental application.

"Hunter also listed the home as the billing address for his personal credit card and Apple account in 2018 and 2019, respectively, Fox News Digital reported Friday after reviewing emails from his abandoned laptop."

The New York Post reported in April 2022 that "Hunter Biden frequently covered family expenses." According to that report:

"Hunter Biden’s access to lucrative financial opportunities also came with expectations — including kicking back as much as 50% of his earnings to his dad, text messages on his old laptop show.

“'I hope you all can do what I did and pay for everything for this entire family for 30 years,' Hunter Biden groused to daughter Naomi in January 2019. “It’s really hard. But don’t worry, unlike pop, I won’t make you give me half your salary.' Pop is Joe Biden.

"The laptop — infamously abandoned at a Delaware repair shop in April 2019 — does not contain any direct evidence of such money transfers, but does show that Hunter was routinely on the hook for his father’s household expenses while Joe Biden was vice president...."