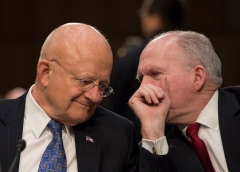 (CNSNews.com) - Senate Judiciary Committee Chairman Lindsey Graham (R-S.C.) says James Clapper, the former director of national intelligence, is high on the list of witnesses he wants to call before the committee as part of an investigation into the origins of the Obama administration’s Trump-Russia-Flynn probe.

On Thursday, CNN's John Berman asked Clapper (a paid CNN contributor) what he would say to Sen. Graham:

"Given my age demographic, I'd be happy to come after I've been vaccinated for COVID-19," Clapper said.

"Would you testify remotely?" Berman asked him:

"I could do it remotely, as (was) the case with the Fauci hearing or respond to questions or -- or that sort of thing, but I don't particularly want to put my life or that of my wife's life in jeopardy for in-person testimony."

Clapper pushed back against Republicans who, he said, are trying to "create the impression that there was something untoward or improper or illegitimate going on here, and there was not.”

Clapper was talking about the requests made by 16 Obama administration officials, including Clapper himself, to unmask names that turned out to be that of incoming National Security Adviser Michael Flynn.

A document released on Wednesday names the 16 Obama administration officials who may have received the name Michael Flynn when they asked the National Security Agency for the name of an American citizen mentioned in foreign intelligence reports between Nov. 8, 2016 and Jan. 31, 2017.

Clapper said unmasking is a "very valuable tool" to know "what is going on in these engagements with valid foreign intelligence targets. And I can't stress that enough. And that's the predicate for the operation of the program. And it is a very important capability for protecting the national security of the country."

Although unmasking is standard procedure, leaking the name of an unmasked citizen is illegal.

Clapper on Thursday -- asked point-blank if he leaked Flynn's name to Washington Post columnist David Ignatius, said, "I did not."

Also See:
Clapper Doesn't Remember Why He Made the Unmasking Requests: 'It's a Routine Thing'