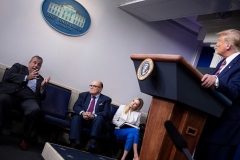 (CNSNews.com) - Chris Christie, the former New Jersey governor and a friend and supporter of Donald J. Trump, said on Tuesday he's disappointed the president wasn't re-elected in November: "But when the court system has run its course, it's time to move on and accept the results of the election."

Christie also said the president's legal team "committed malpractice" by failing to challenge voting rule changes before the election: "They did not do all the things that needed to be done to address some of these issues beforehand."

"You know I have supported the president," Christie told Fox News's "The Story" with Martha MacCallum:

I voted for him both times. I prepped him for all five of the presidential debates that he had in the...two general elections in which he ran, chaired his opioid commission for him, and have been a friend of his for 20 years.

But to say that the courts haven't seen this evidence is simply not true. These affidavits have been submitted to the courts, in opposition to the motions to dismiss those cases that were filed by the opposition in the courts.

Regardless of whether you're Republican or Democratic judges, appointed by the president or George W. Bush or Barack Obama, they have been routinely kicked out.

The fact is that we haven't seen any of these things. We have had promises from Sidney Powell and other members of the president's legal team for blockbuster evidence, and none of it has come forward.

And so I'm as disappointed as anybody that the president was not reelected in November. But the fact is, Joe Biden won the majority of the electoral votes. He had 306. And I think this is a very, very dangerous thing that we're engaging in right now.

Christie noted that Trump has had the opportunity to "to go to many, many courts" to argue that voter fraud cost him the election. "And he has every right to do that, the same way Al Gore had a right to do it in 2000. But when the court system has run its course, it's time to move on and accept the results of the election."

The legal team that was put together for the president's campaign committed malpractice.

I mean, they did not do all the things that needed to be done to address some of these issues beforehand. That was not the case, by the way, in 2016, Martha. When Don McGahn ran the legal operation in 2016, these things were attended to and were on top of them beforehand.

As a former prosecutor, when you try to construct these kind of things after the fact that in an election setting, it's very, very difficult to do. That's why you need to make all these motions and applications beforehand...And you look in Georgia, for instance, preparing for this January 5 election.

Republican lawyers have been in court seemingly since a week or so after the election, forcing courts to make decisions on rules that are going to govern the January 5 voting. And that's the way you're supposed to do it.

And so this is kind of trying to close the door after the horses have already run out of the barn. But all that being said, that's the way our elections are run in this country. And the fact is, they had an opportunity to do it, and they didn't do it.

Christie said voting by mail amid the pandemic did make it easier for people to cast ballots: "And you had more people voting for that reason. There's no evidence at all that I have seen presented in any of these states that there was large-scale voter fraud, in terms of just filling out ballots and sending them in for anonymous people.

So, I have heard a lot of complaints about Philadelphia and Detroit, but the president got a higher percentage of the vote in both of those cities than he did four years ago.

And I fear that that may have cost him the election in those key swing states.

MacCallum asked Christie if he's mulling a presidential run in 2024

"Well, Martha, I'm 58 years old and hardly ready to retire. And it's four years away.

"And, listen, at this time in 2012, no one was predicting that Donald Trump was going to run for president and win in 2016. So it's a long way off. So I wouldn't rule out anything.

"I'm going to continue to try to be active in public life, continue to speak my mind on the issues that are important, and continue to do that. And if that leads to me running for president in 2024, so be it, but certainly not a decision I'm going to make now, and certainly not one that I would rule out now, under any circumstances."