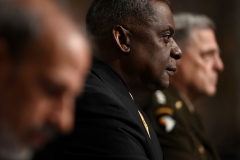 Defense Secretary Lloyd Austin and Chairman of the Joint Chiefs of Staff Gen. Mark Milley testify before a Senate Armed Services Committee hearing on the 2022 budget on June 10, 2021. (Photo by JIM WATSON/AFP via Getty Images)

(CNSNews.com) - "China is not our only challenge," Defense Secretary Lloyd Austin said in his opening statement to the Senate Armed Services Committee on Thursday. "Our budget also includes $617 million to counter the damaging effects of climate change."

The testimony of Austin and Milley follows President Joe Biden's comment on Wednesday, when he told members of the U.S. military in England:

Sen. Kevin Cramer (R-N.D.) told Milley, "I just think it's peculiar that the president would go to another continent and tell our service members there that the number one threat is climate change, albeit a threat."

Later in the hearing, Sen. Dan Sullivan (R-Alaska) asked Defense Secretary Austin, "What is a more immediate threat to our national security interests, that DOD has the capability of responding to...a Chinese communist invasion of Taiwan or the challenge of climate change? I think it's a pretty simple question," Sullivan told Austin.

"The most significant military threat that we're focused on, and you've heard me say this probably 100 times, Senator, is--is--is China," Austin replied. "It's our pacing challenge. And that's what we've asked you a number of times to--to help us resource our efforts on that challenge. And I appreciate what you've done thus far. And I know that--that you'll continue to help us going forward."

Responding to the same question, Milley told the committee that every operations order he's seen in 41 years says weather and terrain must be taken into account in an "enemy situation."

"We always consider weather, and climate change is weather at the strategic level," Milley said:

The military threat is China, as the secretary just said, is the pacing threat. We are calculating all of our calculations relative to that as a pacing threat, and others are second in--in nature.

And the third piece relative to the China versus us spending, this is a disturbing trend. There's no question about it with respect to China. They are--they have made a major economic investment in developing their military. It's been going on for 20 or 30 years...And the Chinese have a deliberate plan to be a global challenger to the United States of America militarily by mid-century. We have got to continue strong investments in our military, and I think this budget for this year is an adequate investment right now. We have to set the conditions in order to pivot to the future character of war with the pacing threat of China.

President Biden's Fiscal Year 2022 budget requests $715 billion for the Defense Department, a 1.6 percent increase from the prior year.