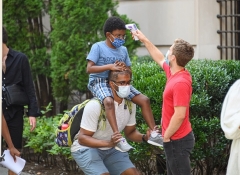 (CNSNews.com) - COVID deaths for the week ending August 22 have returned to levels not seen since the end of June.

Based on death certificates submitted to the National Center for Health Statistics -- part of the federal Centers for Disease Control and Prevention -- 3,504 people died of "confirmed or presumed COVID-19," for the week ending August 22.

As the chart below shows, COVID deaths increased until mid-April, dropped steadily for ten weeks, then increased again for four weeks starting in July to a second peak of 7,676.

COVID deaths have now declined again for at least four weeks, maybe more, as death certificates continue to come in.

CDC notes that its weekly provisional death counts are incomplete because of the lag in time between when the death occurred and when the death certificate is completed, submitted to NCHS and processed for reporting purposes. This delay can range from 1 week to 8 weeks or more.

Data for the most recent two weeks always increases more significantly than data for distant weeks.

Also See:
Trump: Biden and Harris Are 'Going to Make the Vaccine Into a Negative'