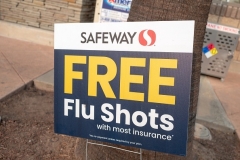 (CNSNews.com) - "Seasonal influenza activity in the United States is increasing, including indicators that track hospitalizations. The amount of activity varies by region," the federal Centers for Disease Control and Prevention says on its flu-tracker web page.

CDC says the eastern and central parts of the country seeing the largest increases in flu cases, based on data available through December 18.

And unlike COVID, flu puts young children at high risk: "Most influenza A(H3N2) infections have occurred among children and young adults ages 5-24 years; however, the proportion of infections occurring among adults age 25 years and older has been increasing," CDC said in its most recent update.

"The first two influenza-associated pediatric deaths this season were reported this week" [week 50 out of 52], CDC said. "Both cases were associated with influenza-A virus infections."

(Flu activity was unusually low throughout the 2020-2021 flu season because of COVID mitigation measures.)

According to CDC: "Although all children younger than 5 years old are considered at higher risk of serious flu complications, the highest risk is for those younger than 2 years old, with the highest hospitalization and death rates among infants younger than 6 months old.

The good news is, vaccines are available for all but the youngest infants, as noted above. But CDC says based on the data available so far, the H3N2 viruses have continued to evolve, meaning the vaccines may have limited efficacy.

-- Hospitalizations for influenza are starting to increase.

-- The flu season is just getting started. There’s still time to get vaccinated. An annual flu vaccine is the best way to protect against flu and its potentially serious complications. CDC recommends everyone 6 months and older get a flu vaccine.

-- There are early signs that flu vaccination uptake is down this season compared to last. (Uptake is the proportion of a population that has received a specific vaccine, in this case, the flu vaccine.)

-- Flu vaccines are available at many different locations, including pharmacies and health departments. With flu activity just getting started, there is still time to benefit from flu vaccination this season. Visit www.vaccines.gov to find a flu vaccine near you.

-- There are also flu antiviral drugs that can be used to treat flu illness.

CDC recommends a yearly flu vaccine for everyone ages six months and older, starting in October. Pregnant women should get a flu vaccine to protect both the mother and her baby from flu.