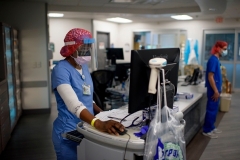 (Photo of ICU at Oakbend Medical Center in Richmond, Texas by MARK FELIX/AFP via Getty Images)

(CNSNews.com) - The most recent death certificates submitted to the federal Centers for Disease Control and Prevention show that COVID-involved deaths in this country declined in the second half of July.

Based on CDC's preliminary data, 4,081 people died of COVID-involved disease in the week ending July 18. That is an 8.29 percent decrease from the 4,450 who died of COVID in the prior week. And it is 75.97 percent below the mid-April peak of 16,985 COVID-involved deaths.

Preliminary data for the week ending July 25 shows that 1,780 people died of COVID. But as CDC notes, data in recent weeks is more likely to be incomplete. The numbers change as more death certificates come in, but it now appears to be a declining trend for the second half of July.

For ten straight weeks, starting in mid-April, COVID-involved deaths declined steadily in this country, but that changed in the weeks ending July 4 and July 11, when the number of cases increased. However, even in those two uptick-weeks, the COVID death count was still 77.5 percent below the mid-April peak.

In a report released last week, the Government Accountability Office noted that there are multiple ways to analyze COVID-19 data, including a method that examines "excess deaths."

For example, the 16,985 COVID-involved deaths reported for the week ending April 18 is 141 percent of the number that CDC would have expected for that week--a much higher number, in other words. The pandemic may explain some of the discrepancy.

The following chart from GAO shows the higher-than-expected weekly mortality for 2020, as of July 14, 2020. The excess deaths coincide with the onset of the pandemic.

CDC notes that delays in reporting deaths from all causes, including COVID, can range from 1 to 8 weeks.

However, CDC says provisional death counts deliver the most complete and accurate picture of lives lost to COVID-19 because they are based on death certificates, which are the most reliable source of data and contain information not available anywhere else, including comorbid conditions, race and ethnicity, and place of death.