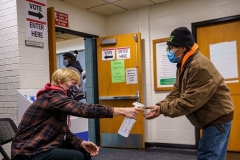 Voting in the age of COVID: Hand sanitizer is made available to voters in Minneapolis, Minnesota on November 3, 2020. (Photo by KEREM YUCEL/AFP via Getty Images)

(CNSNews.com) - COVID-involved deaths in recent weeks are well below the numbers recorded this past summer, based on death certificates submitted to the National Center for Health Statistics, which is part of the federal Centers for Disease Control and Prevention.

For the week ending September 26, 3,809 COVID-involved deaths were reported to NCHS on a preliminary basis.

Since mid-April, COVID-involved deaths have mostly trended down, with brief exceptions in early July and possibly in early October.

The chart below shows the ups and mostly downs, based on death certificates submitted so far.

CDC's National Center for Health Statistics notes that death certificates come in on a lagging basis, meaning that numbers for more recent weeks will increase far more than numbers for earlier weeks.

CDC defines "COVID-involved" deaths as "deaths with confirmed or presumed COVID-19, coded to ICD-10 code U071.1."

The National Center for Health Statistics reports those deaths on a weekly basis, but CDC also offers a "daily tracker" with updated numbers.

CDC says cases are spiking in many states -- particularly in the upper West/Midwest (Montana, Wyoming, Nebraska, North and South Dakota, Iowa, Wisconsin) and in Rhode Island.