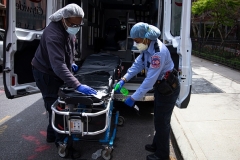 EMTs sanitize a hospital gurney after dropping off a patient at a Brooklyn hospital. (Photo by Robert Nickelsberg/Getty Images)

(CNSNews.com) - According to the latest death certificates submitted to the CDC's National Center for Health Statistics, deaths involving COVID-19 increased in all four weeks that ended in July. (Data for August are still too preliminary to be reliable.)

CDC notes that its week-by-week COVID death count is incomplete because of the lag in time between when the death occurred and when the death certificate is completed, submitted to NCHS and processed for reporting purposes. It says the delay can range from 1 week to 8 weeks or more. Data for recent weeks is revised more significantly than death tolls for earlier weeks.

Dr. Scott Gottlieb, the former Food and Drug Administration Commissioner under President Trump, told CBS's "Face the Nation" on Sunday, "There's been a fairly persistent level of infection, hospitalizations and deaths over the last couple of weeks. We've had over a thousand deaths a day for at least two weeks now, over 50,000 infections a day on average."

Gottlieb said the number of hospitalizations has come down a little bit, but not rapidly.

"What's happening is, as the cases start to decline in the southern states -- Arizona, Texas, Florida -- we're starting to see infections pick up in other parts of the country. California is still increasing. Really the only state that seems to have come down quite a bit, of the epidemic Sunbelt states, is Arizona.

The CDC's National Center for Health Statistics puts the U.S. death toll from COVID at 153,727 people.