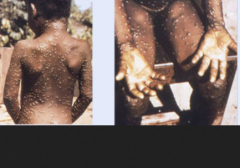 Since 2017, 218 monkeypox cases have been confirmed in Nigeria. (Photo: CDC website)

(CNSNews.com) - The federal Centers for Disease Control and Prevention said on Wednesday it is investigating a case of monkeypox in a traveler who returned to the United States from Nigeria.

This is the second case of monkeypox reported in this country so far this year.

"CDC is working with international health counterparts, the airline, and state and local health officials in the Washington, D.C., area to contact airline passengers and others who may have been in contact with the patient," who is now in isolation.

CDC is urging U.S. healthcare providers to be on the lookout for "poxvirus-like lesions," which are a hallmark of the contagious viral disease.

"Because of the health risks associated with a single case of monkeypox, clinicians should report suspected cases immediately to state or local public health authorities regardless of whether they are also exploring other potential diagnoses," CDC said.

The incubation period (time from infection to symptoms) for monkeypox is usually 7−14 days but can range from 5−21 days.

Airline passengers on the same flight as the infected traveler were wearing masks because of rules imposed as a result of the COVID pandemic.

"Therefore, it’s believed the risk of spread of monkeypox virus via respiratory droplets to others on the planes is low," CDC said. "Working with airline and state and local health partners, CDC is assessing potential risks to those who may have had close contact with the traveler on the plane and after their arrival in the United States."

CDC said the illness typically lasts for 2−4 weeks. In Africa, monkeypox has been shown to cause death in as many as 1 in 10 persons who contract the disease.