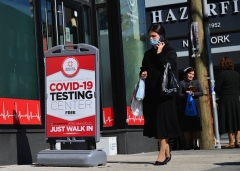 A masked woman walks past a COVID-19 Testing Center in the Borough Park section of Brooklyn on October 9, 2020. More testing means more cases. (Photo by ANGELA WEISS/AFP via Getty Images)

(CNSNews.com) - The federal Centers for Disease Control and Prevention says total COVID cases in this country now total 8,128,524, with an additional 47,035 new cases reported in the last day alone.

And while cases are rising in most states, deaths are not rising at the same rate: CDC counts 0.2 deaths per 100,000 people in the last seven days.

The chart below shows the weekly number of COVID deaths based on death certificates submitted to CDC's National Center for Health Statistics on a rolling basis.

The week ending April 18 was the grimmest so far, with a record 17,076 COVID deaths. (These are deaths with confirmed or presumed COVID-19, coded to the ICD–10 diagnostic code U07.1.)

For the next ten weeks, COVID deaths declined, dropping to 3,783 for the week ending June 27. A five-week spike in deaths began the following week (July 4), but since early August, deaths have been trending down. (As noted, the late September/early October numbers are too preliminary to be reliable.)

Despite the rising number of cases,President Donald Trump told a rally in Tucson, Arizona on Monday, "We are rounding the turn" on coronavirus.

Trump said a vaccine will end the pandemic. "But even without the vaccine, the pandemic is ending. It’s going to end. It ends with it, but you know, this can go quickly. This can make it go a lot faster.

"Biden’s lockdown will crush America,” Trump warned. “My plan will crush the virus and bring back your American dream."

Biden has called for a national mask-wearing mandate, and he says he'd be guided by the "science" if he wins the presidency.

One of the nation’s foremost infectious disease scientists, Dr. Anthony Fauci, told CBS's "60 Minutes" on Sunday that things would have to get "really, really bad" for him to recommend another national lockdown:

“So instead of having an opposition, open up the economy, get jobs back, or shut down. No. Put ‘shut down’ away and say, we're going to use public health measures to help us safely get to where we want to go," Fauci said.