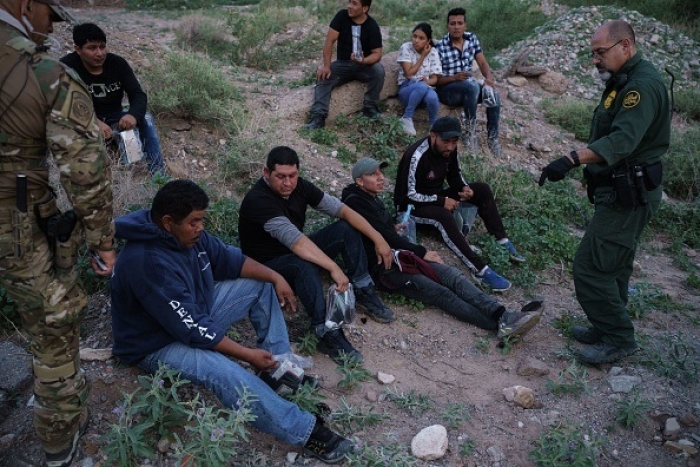 (CNSNews.com) - U.S. Customs and Border Protection reports 221,303 "encounters" of noncitizens trying to illegally cross into the United States in March, the highest monthly total in history -- and those are just the encounters we know about.

(Encounter data includes U.S. Border Patrol apprehensions and people deemed inadmissible at ports of entry (both of those categories fall under Title 8); and expulsions under Title 42 (public health measure).

About half of the 221,303 total encounters -- 109,549 of them -- were processed for expulsion under Title 42, the public health (COVID) measure that is slated to expire on May 23, something that concerns both Democrats and Republicans who anticipate a massive rush to the U.S. border at that time.

President Joe Biden has never visited the border, and his administration refuses to address the crisis that is only growing worse. 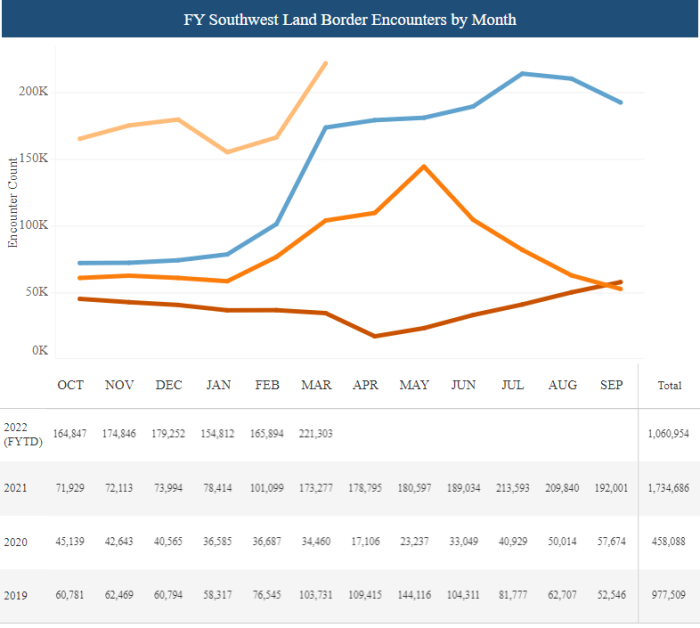 "My position is that they campaigned on an open border -- this is exactly what open border looks like, they are keeping a campaign promise," Biggs told "Fox & Friends First."

“And the fact that they refuse to make things better tells you that this is willful, it is purposeful. Nobody keeps bad policies in place unless they like the results of those bad policies, and these are bad policies.  I could give you specifics how policies have changed. But the reality, this is purposeful, they're playing to their base, I suppose.

"Beyond that, we don't know the bad intentions that the Biden administration has. I personally don't think President Biden is cognizant and capable of understanding the full danger this country's in because of the southern border crisis. But Secretary Mayorkas does, and he's not doing anything. He should resign, or my impeachment resolution should be heard."

Asked what a Republican-led Congress could do to improve the situation, Biggs mentioned three things: Legislation that includes "curative measures" for the border; investigations of officials who are making bad decisions; and getting rid of Mayorkas, "because what he's done is allowed literally millions of people into this country illegally, and our border's absolutely not secure, it's dangerous," Biggs said.

Biggs said he thinks Mayorkas would resign rather than be impeached, but either way, "maybe we can get somebody else in there who will actually take active measures to secure our border," he said.

At the White House on Monday, correspondent Peter Doocy asked Press Secretary Jen Psaki about a Fox News report that at least 23 people apprehended at the southern border in 2021 were on the terror watch list.

Psaki said it shows the Border Patrol "was doing their job. I mean, they -- they apprehended people at the border."

Doocy asked if the White House "can say with certainty" that no other people on the terror watch list managed to evade capture.

"Here's what we're talking about," Psaki responded. "Encounters we know of suspected terrorists attempting to cross the southern border, they're very uncommon. We're talking about a few dozen annual encounters at most -- at most. And these encounters represent significantly less than the 0.01 percent of total encounters per fiscal year in recent years.

"But I'd note these individuals, these 23 people, the Border Patrol, they stopped them. They prevented them from getting into the country. They're protecting our homeland and keeping us safe," Psaki said.

Doocy followed up: "So the president is not worried about holes in the southern border being exploited by people trying to come in and kill Americans?"

"He's grateful to the Border Patrol for doing their job and -- and stopping these people, and preventing them from getting into the country," Psaki responded.