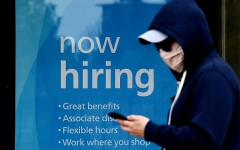 A sign of the times in Arlington, Virginia, amid a labor shortage the White House can't really explain. (Photo by OLIVIER DOULIERY/AFP via Getty Images)

(CNSNews.com) - Pressed on the labor shortage that is hurting so many American businesses, Transportation Secretary Pete Buttigieg on Wednesday blamed a lack of child care, job "quality," and other vague notions such as “what it means to be a worker.”

But none other than MSNBC's liberal “Morning Joe” co-host Mika Brzezinski wasn't buying it.

Three times, Brzezinski asked Buttigieg why people are not going back to work. And three times, Buttigieg mentioned "child care," which is one of the many new entitlement programs in President Biden's "Build Back Better Act."

Buttigieg's first explanation went like this, when Brzezinski first asked him why businesses can't find workers:

Talk to, you know, certainly any small business owner, and we're seeing it a lot in the transportation sector. For example, when you see those ships that are at anchor in the port, some of those issues actually might have to do with the availability of truckers a thousand miles inland.

Now, there are a lot of things contributing to this. One of them is child care, of course, which is why the president's build back better vision is going to be good for the labor market.

Also, some of these professions, frankly, just need to (do) a better job. I mean, if you look at transportation and warehousing compensation in real terms, it is way down from where it was a generation ago. And that helps to explain why with trucking, for example, at the biggest employers, the annual turnover rate -- think about this, annual turnover rate for truck drivers is 90 percent. That's the sign of some real issues with the quality of the job. And we've got to work on that, too.

Brzezinski question #2: 'What exactly do you mean when you say people want a better job?'

So you've brought the explanation down to one job, trucking, and the quality of the life, or quality of that job. But we have companies across America that are offering people $15, $20 an hour. They're offering health care for the first time in businesses where they have 17-year-olds doing the job because they can't get adults to come to work.

So, you know, before COVID, before Biden, there was a problem with child care and people still went to work. We are in a very different place right now, and I need to understand the explanation for that. Is it the checks that, many argue, that keep Americans from wanting to go back to work? What exactly do you mean when you say people want a better job? Because right now, anybody in America can go and try and get a service, and there will be a company or a business that doesn't have someone working there to help them.

Buttigieg's explanation #2: child care, 'deep transformations,' 'what it means to be a worker'

“So, you know, a lot of people did blame the checks,” Buttigieg responded:

But as we saw, when the checks ended, this issue continued. So we know that it goes deeper than that. And I do think it has to do with some of these other concerns. Yes, the child care issue is not new, but it is a greater crunch than ever, even compared to a year or two ago. Which is why it's so important for us to support child care.

I mean, again, I think the underappreciated dimension of the build back better agenda, what I call part two of the big deal, part one being the transportation and infrastructure bill we just passed, part of that is that that's actually going to ease these labor market pressures.

And it's not just us in the administration saying it. A lot of very respected economists have pointed to that same effect and how it could also help with inflation. Look, we're clearly going through some deep transformations and what it means to be a worker and what it means to be a customer in this country. Those transformations can end up in a very good place for American workers, but we got to get through this period by making it easier for people to be able to return to the workforce.

I mean, if you're telling me that build back better will bring people back to work because of much-needed and long-needed issues like child care and pre-k, that still doesn't explain why people aren't coming to work today. Especially when companies are trying to raise their salaries as much as possible.

We have the prices of goods going up. It's more expensive to live. Why aren't people coming back to work right now? Why are we in this crisis where, whether it is sitting on a plane for four hours to wait for a fuel truck driver, or walking into a store that has no workers in it, or going to a gas station that doesn't have someone to pump the gas?

“Well, again, I would not ignore the issue of child care,” Buttigieg said.

I would not ignore the issue of safety. Some people are still concerned about returning during the course of the pandemic. I would definitely point to the fact that we've just seen a huge expansion in the economy, especially over the course of the last year, right?  When you add 5, 6 million jobs back to the economy in less than a year, it is going to take a while for that to settle out in the labor market. I think we're seeing some of those effects right now.

But I also think there's a bigger, deeper reckoning going on in this country. You know, we went for a long time where I think a lot of people just assumed that working for poverty wages was the only way out. Now we're seeing better wages, even in jobs like fast food, not known for generosity in pay or benefits. I do think it'll have an effect. I don't think it'll have an effect overnight.

"Because I've read all the stories in The New York Times, 'Oh, people are rethinking their relationship with work.' Well, awesome,” Scarborough said. “But at what point in the development of mankind did workers become philosopher kings, and they just are sitting there, thinking, rubbing their chins. Will it pay the rent?

"I ask this question because this is the question that is having a real world impact on millions and millions of Americans. They're looking around going, "Wait a sec, why is this happening?" Why can't we not only get things on shelves, why does it look like pictures from an old Soviet Union grocery store, and why isn't anybody working?"

At a CNN town hall in July, President Biden was asked about the labor shortage.

"I think it really is a matter of people deciding now that they have opportunities to do other things and there's a shortage of employees. People are looking to make more money and to bargain. And so I think your business and the tourist business is really going to be in a bind for a little while," Biden told a restaurant owner who said he can't find enough workers.

Others have blamed "Bidenomics," including the various government moves to "put money in pockets."

While the extended unemployment benefits have ended, the child tax credit sends automatic monthly payments to qualifying households. The American Rescue Plan increased the Child Tax Credit from $2,000 per child annually to $3,000 per child for children over the age of six; and from $2,000 to $3,600 annually per child for children under the age of six, and it raised the age limit from 16 to 17.

Biden's Build Back Better Act would make the child tax credit payments permanent. But as many families have noticed, inflation is taking a bite out of those monthly payments.

Today, the Labor Department’s Bureau of Labor Statistics said inflation rose at a 6.2% annual rate in October, a 30-year high.