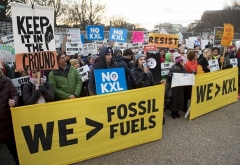 Opponents of the Keystone XL and Dakota Access pipelines protest President Donald Trump's executive orders advancing the pipelines' construction next to the White House on January 24, 2017. (Photo by SAUL LOEB/AFP via Getty Images)

(CNSNews.com) - Asked about President Joe Biden's move to stop construction of the Keystone Pipeline, killing more than a thousand union jobs along with it, Transportation Secretary-nominee Pete Buttigieg told Congress on Thursday, "We are very eager to see those workers continue to be employed in good paying union jobs, even if they might be different ones."

"That is a project that right now today has 1,200 good paying union jobs,," Cruz told Buttigieg at his confirmation hearing. "And in 2021, the Keystone pipeline was scheduled to have more than 11,000 jobs, including 8,000 union jobs, for contracts worth $1.6 billion."

Cruz asked Buttigieg, "What do you say to those workers whose jobs have just been eliminated by presidential edict?"

"Well, I think the most important thing is to make sure that we make good on the promise of the president's climate vision as being one that, on net, creates far more jobs, millions, we hope.

“I know that won't just happen. We'll have to do a lot of work to make sure that's real. But getting this right means ensuring that there are more good paying union jobs for all Americans delivered through that infrastructure vision."

"So," Cruz followed up, "for those workers, the answer is, somebody else'll get a job?"

"The answer is that we are very eager to see those workers continue to be employed in good paying union jobs, even if they might be different ones," Buttigieg said.

Cruz noted, "There was a time when the Democratic Party, under presidents like FDR, was considered the party of union workers and blue-collar workers. And decisions like yesterday, and--and I fear more decisions that we'll see in the days and weeks to come, are demonstrating more and more that today's Democratic Party is not concerned with working men and women having jobs, and that the answer is, we'll eliminate your jobs, and I guess, good luck in the future."

"And we can do that while recognizing the fact that, when the books are written about our careers, one of the main things we'll be judged on is whether we did enough to stop the destruction of life and--and property due to climate change.

"I've got to believe we can do both of those things. But if you and I can make common cause in our support for labor, then I--I think that's great news," Buttigieg responded.

Sen. Dan Sullivan (R-Alaska) also asked Buttigieg about Biden's decision to cancel the Keystone Pipeline, a move that has not pleased the Canadian government or the pipefitters' union.

"So I believe that the president's climate vision will create more jobs on net," Buttigieg told Sullivan.

"And I think it's going to be very important to work with him and work with Congress to make sure that we can deliver on that promise, too, that on net, more good paying union jobs will be created in the context of the climate and infrastructure work that we have before us than has been impacted by other decisions."

In a statement issued on Jan. 20, Biden's inauguration day, Canadian Prime Minister Justin Trudeau welcomed Biden's commitment to fight climate change, but "we are disappointed but acknowledge the President’s decision to fulfill his election campaign promise on Keystone XL.

“I spoke directly with President Biden about the project last November," Trudeau said, "and Ambassador Hillman and others in our government made the case to high-level officials in the incoming administration.

“Workers in Alberta, Saskatchewan, and across Canada will always have our support. Canada is the single-largest supplier of energy to the United States, contributing to U.S. energy security and economic competitiveness, and supporting thousands of jobs on both sides of the border..."

The American Petroleum Institute said canceling the Keystone XL Pipeline would be a "significant step backwards both for environmental progress and our economic recovery."

Pipelines are the safest, most environmentally friendly way to transport energy, and the economy cannot recover at full speed unless we deliver reliable energy from where it is to where it is needed.

The Keystone XL Pipeline has been through more than 10 years of extensive environmental reviews, and today’s announcement is a slap in the face to the thousands of union workers who are already a part of this safe and sustainable project. This misguided move will hamper America’s economic recovery, undermine North American energy security and strain relations with one of America’s greatest allies.

With smart regulations, we can continue to meet our shared goals of reducing emissions, protecting public health and developing affordable, reliable and cleaner energy. We will work closely with the Biden administration as it conducts regulatory reviews that may impact our industry.