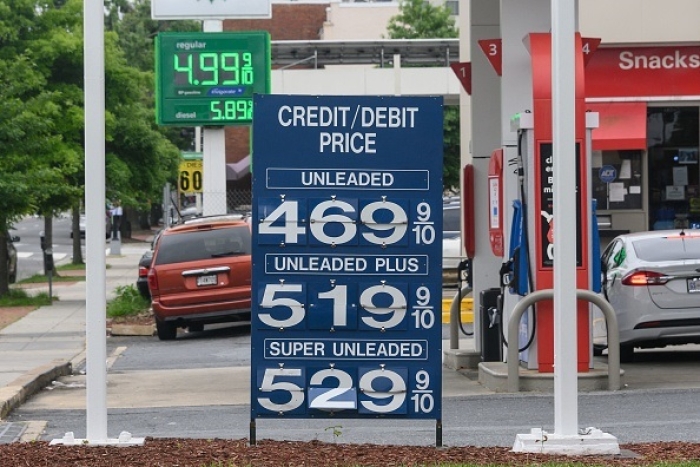 Gasoline prices are posted at a gas station in Washington, DC, on May 26, 2022. They're even higher now. (Photo by NICHOLAS KAMM/AFP via Getty Images)

Transportation Secretary Pete Buttigieg told ABC's "This Week" that "the price of gasoline is not set by a dial in the Oval Office."

"And when an oil company is deciding, hour by hour, how much to charge you for a gallon of gas, they're not calling the administration to ask what they should do; they're doing it based on their goal of maximizing their profits.

"It's been very striking right now to see these oil companies, who have become almost ridiculously profitable, and you hear these oil executives on the record talking about how they're not going to increase production. Why would they? They're doing great right now.

"It's why the president has called for a "Use it or lose it" policy, where, if you're sitting on these thousands of permits like these oil executives have been, and you're not doing anything with them, then you're going to be held accountable for that.

"Now, so far congressional Republicans have blocked action to do something like that. But we think that's another step that would make a difference, among the many, many steps the president's already taken."

Buttigieg mentioned that oil companies are "not going to increase production."

But around the same time Sunday morning, economist Gene Sperling, a senior advisor to the president, told "Fox News Sunday" that U.S. oil companies are planning to increase production:

"And in the meantime, the president is releasing 1 million barrels a day through the Strategic Petroleum Reserve."

Host John Roberts noted that the release of oil from the SPR "doesn't appear to be having much effect."

"Well, I don't really agree with that," Sperling said -- as gasoline prices hit new records. "I think it is having a positive effect, but I understand that if prices are still high or even going up, again, as I understand, it's not much comfort to an American family going to the gas pump."

Sperling said he's "sure" the record gasoline prices "will be reflected in the inflation report that we will get this week."