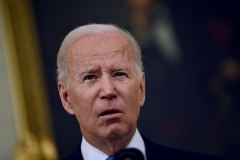 (CNSNews.com) - Non-farm payrolls added a whopping 678,000 jobs in February, well above the consensus estimate of 400,000; and the unemployment rate dropped two-tenths of a point to 3.8 percent, the lowest of Biden's presidency, the U.S. Bureau of Labor statistics reported Friday.

The unemployment rate dropped as low as 3.5 percent during the Trump administration, before COVID hit.

In February, the civilian non-institutional population in the United States was 263,324,000. That included all people 16 and older who did not live in an institution, such as a prison, nursing home or long-term care facility.

Of that civilian non-institutional population, 163,991,000 were participating in the labor force, meaning they were either employed or unemployed -- they either had a job or were actively seeking one during the last month. This resulted in a labor force participation rate of 62.3 percent in February -- following the impressive 0.3-point month-to-month increase in January.

The participation rates was 61.4 percent when Biden took office. Today's number is the highest since he became president.

(The labor force participation rate reached a seven-year high of 63.4 percent in January 2020, the final year of Trump's presidency and just before the onset of COVID.)

BLS said job growth was widespread over the month, led by gains in leisure and hospitality, professional and business services, health care, and construction. BLS also noted that nonfarm payroll employment is still down by 2.1 million, or 1.4 percent, from its pre-pandemic level in February 2020.

Other findings from the BLS Household Survey:

-- In February, 4.2 million persons reported that they had been unable to work because their employer closed or lost business due to the pandemic--that is, they did not work at all or worked fewer hours at some point in the 4 weeks preceding the survey due to the pandemic. This measure is down from 6.0 million in the previous month.

Among those not in the labor force in February, 1.2 million persons say they were prevented from looking for work due to the pandemic, down from 1.8 million in the prior month. (To be counted as unemployed, by definition, individuals must be either actively looking for work or on temporary layoff.)