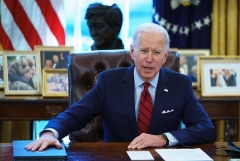 Among the many executive orders signed so far by President Biden is one canceling the Keystone XL pipeline and the good-paying jobs that go with it. (Photo by MANDEL NGAN/AFP via Getty Images)

(CNSNews.com) - The first employment report of the Biden presidency, coming just 16 days after he took the oath of office, shows the economy is improving, but has a long way to go to match the records set before the coronavirus hit in early 2020.

The number of employed Americans has now increased for nine straight months, but remains well below the record 158,735,000 set under President Trump in December 2019.

The economy added only 49,000 jobs in January, a low addition compared with most recent months, but an improvement over the December job losses (-227,000, revised), as the pandemic continues to deflate job creation.

Notably, Joe Biden came into office talking about job creation in the clean energy sector, but his first executive actions -- including cancelation of the Keystone XL pipeline and his relaxed immigration policies -- are expected to cost some American citizens their jobs at a time when the coronavirus pandemic has devastated many businesses.

In January, the civilian non-institutional population in the United States was 260,851,000. That included all people 16 and older who did not live in an institution, such as a prison, nursing home or long-term care facility.

Of that civilian non-institutional population, 160,161,000 were participating in the labor force, meaning they either had a job or were actively seeking one during the last month. This resulted in a labor force participation rate of 61.4 percent in January, a slight decrease from December's 61.5 percent.

The number of Americans counted as not in the labor force, meaning they don't have a job and are not looking for one -- was 100,690,000 in January, little changed from the prior two months.

Biden talks about creating jobs as he eliminates some

President Biden has made bold promises to create millions of good-paying jobs:

Here are excerpts of his remarks as he promised massive job creation, even as he launched job decimation in the fossil fuel/pipeline industries:

A key plank of our Build Back Better Recovery Plan is building a modern, resilient climate infrastructure and clean energy future that will create millions of good-paying union jobs — not 7-, 8-, 10-, 12-dollars an hour, but prevailing wage and benefits.

You know, we can put millions of Americans to work modernizing our water systems, transportation, our energy infrastructure to withstand the impacts of extreme climate...

When we think of renewable energy, we see American manufacturing, American workers racing to lead the global market.  We see farmers making American agriculture first in the world to achieve net-zero emissions and gaining new sources of income in the process...

We see these workers building new buildings, installing 500,000 new electric vehicle charging stations across the country as we modernize our highway systems to adapt to the changes that have already taken place.  We see American consumers switching to electric vehicles through rebates and incentives...

And not only that, the federal government owns and maintains an enormous fleet of vehicles, as you all know.  With today’s executive order, combined with the Buy American executive order I signed on Monday, we’re going to harness the purchasing power of the federal government to buy clean, zero-emission vehicles that are made and sourced by union workers right here in America.

With everything I just mentioned, this will mean one million new jobs in the American automobile industry. One million.

And we’ll do another thing: We’ll take steps towards my goal of achieving 100 percent carbon-pollution-free electric sector by 2035. Transforming the American electric sector to produce power without carbon pollution will be a tremendous spur to job creation and economic competitiveness in the 21st century, not to mention the benefits to our health and to our environment...

We’re going to need scientists, the national labs, land-grant universities, historical black colleges and universities to innovate the technologies needed to generate, store, and transmit clean electric — clean electricity across distances, and battery technology, and a whole range of other things.

We need engineers to design them and workers to manufacture them. We need iron workers and welders to install them.  Technologies they invent, design, and build will ultimately become cheaper than any other kind of energy, helping us dramatically expand our economy and create more jobs with a cleaner, cleaner environment.  And we’ll become the world’s largest exporter of those technologies, creating even more jobs.

You know, we are also — we’re going to build 1.5 million new energy-efficient homes and public housing units that are going to benefit communities three times over: one, by alleviating the affordable housing crisis; two, by increasing energy efficiency; and, three, by reducing the racial wealth gap linked to home ownership.

These aren’t pie-in-the-sky dreams. These are concrete, actionable solutions, and we know how to do this...