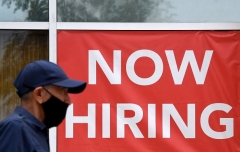 A man walks by a "Now Hiring" sign outside a store in Arlington, Virginia in August 2021. (Photo by OLIVIER DOULIERY/AFP via Getty Images)

(CNSNews.com) - September was a month of slow job growth, with a measly 194,000 nonfarm payroll jobs added -- the worst number of the year.

It was well below analysts' expectations of 500,000, and it follows the disappointing (revised) 366,000 payroll jobs added in August, the Labor Department's Bureau of Labor Statistics reported on Friday.

The unemployment rate fell, but so did the important labor force participation rate, which has remained within a narrow range of 61.4 percent to 61.7 percent since June 2020. And the number of people who are not in the labor force -- have no job and are not looking for one -- is the highest it's been since March.

Now that most children are back in school and pandemic-related unemployment benefits have ended, more Americans returned to work last month.

This produced a 4.8 percent unemployment rate, well below the 5.2 percent in August and the lowest since the pandemic began.

People are classified as unemployed if they do not have a job, have actively looked for work in the prior four weeks, and are currently available for work.

In September, the civilian non-institutional population in the United States was 261,766,000. That included all people 16 and older who did not live in an institution, such as a prison, nursing home or long-term care facility.

Of that civilian non-institutional population, 161,354,000 were participating in the labor force, meaning they either had a job or were actively seeking one during the last month. This resulted in a labor force participation rate of 61.6 percent in September -- down a tenth of a point from the 61.7 percent in the prior two months, and only 0.2 points higher than the 61.4 percent when Biden took office.

The labor force participation rate reached a Trump-era high of 63.4 percent in January 2020, just before the onset of COVID.

BLS noted that notable job gains occurred in leisure and hospitality, in professional and business services, in retail trade, and in transportation and warehousing. Employment in public education declined over the month.

Average hourly earnings for all employees on private nonfarm payrolls rose by 19 cents to $30.85 in September, following large increases in the prior five months. Businesses across the country are paying more because of a worker shortage.

Labor Secretary Marty Walsh put some of the blame on the delta variant, noting that only 74,000 jobs were gained in hospitality sector last month. "The number absolutely would have been higher if we weren't dealing with the delta variant. The number was kind of under-projected there because of people's fear of going out to dinner and also people's fear of working in restaurants and hospitality and tourism of the virus," he told Fox Business.

Asked about the drop in the labor force participation rate (61.6 percent in September, down from 61.7 percent in August), Walsh said he thinks there's "a lot going on."

President Biden "has lost the confidence of the American people to lead the economy,” Brady said. “If this were a football team with this losing record, the coach would be searching for a new job at this point.”