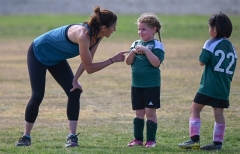 Members of a Los Angeles-area youth soccer league get some tips from the coach. (Photo by ROBYN BECK/AFP via Getty Images)

(CNSNews.com) - "Athletic teams or sports designated for 'females,' 'women' or 'girls' shall not be open to students of the male sex."

The bill also says, "Any student who is deprived of an athletic opportunity or suffers any direct or indirect harm as a result of a violation of this act shall have a private cause of action."

The new law would take effect on July 1.

The Human Rights Campaign is blasting the bill as an attack on transgender children:

"There is simply no justification for banning transgender girls and women from participating in athletics other than discrimination," the group said in a statement. "Like all girls, transgender girls just want to play and be part of a team with their friends. History will not look kindly on this moment in Mississippi."

The bill's sponsor, Republican State Sen. Angela Hill, is quoted as saying she's had "numerous coaches across the state call me and believe that they feel there's a need for a policy in Mississippi because they are beginning to have some concerns of having to deal with this."

The Mississippi bill comes less than two months after President Joe Biden -- on his first day in office -- signed an executive order banning discrimination based on sexual orientation and gender identity.

"Children should be able to learn without worrying about whether they will be denied access to the restroom, the locker room, or school sports," Biden's order states.

Biden also has said he will be guided by science in all things. Basic biology says females have two X chromosomes in their cells, whereas males have both an X and a Y chromosome.

While it is possible to change one's secondary sex characteristics through hormones and surgery, chromosomes cannot be changed, and the male's chromosomes tend to give them greater bone density, muscle mass, and strength.

Previous efforts to bar biological males from the sports teams of biological females have brought lawsuits. In Iowa, a federal judge ruled last year that transgender girls must be allowed to join teams corresponding to their gender identity.

Allowing biological males to compete in all-female sports deprives women of the opportunity to participate fully and fairly in sports and is fundamentally unfair to female athletes.

Sports are an important part of education and character development and provide an arena where individual discipline can result in achievement and recognition.  The purpose of all-female athletics is to ensure that women have an equal opportunity to participate, compete and excel in this important part of life.  Title IX has been a major step forward in the long fight to achieve this equality.

As reflected in Title IX, the basis for single-sex athletics, is rooted in the reality of biological differences between the sexes.  Clearly then, eligibility to participate on a single-sex team must be based on objective biological fact.  Girls should not be forced, through the dismantling of Title IX, to be sidelined in their own sports.