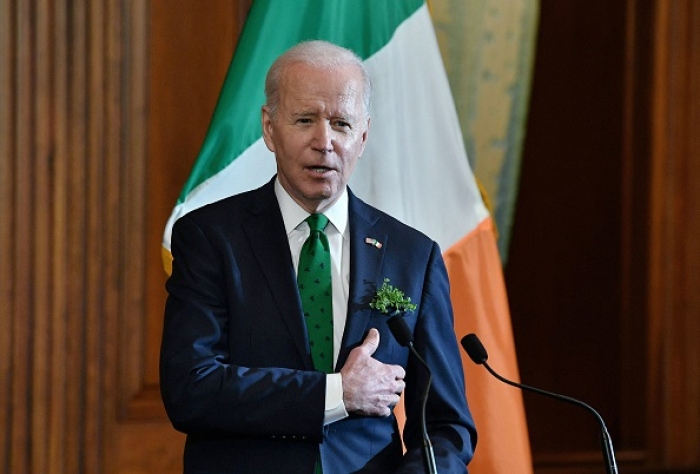 (CNSNews.com) - President Joe Biden frequently invokes his own childhood and quotes his own parents and grandparents in the speeches he gives.

On Thursday, at a St. Patrick's Day celebration at the Capitol, Biden outdid himself, scattering two dozen references to his own family in his tribute to Ireland and his own Irish heritage.

Here's just a portion of the president's speech, which appeared to be mostly unscripted:

"I — you know, I'm the proud son of Catherine Eugenia Finnegan Biden.  And like so many Americans of Irish heritage, I love Ireland and I was raised in a circumstance where you would have thought my whole family — none of — they came in 1844 and 1845, but you'd think they'd all lived in Ireland the last 60 years — the previous 60 years.

"The — there's — as I was talking to Taoiseach today, the Irish on St. Patrick's Day think that — Irish Americans think they're more Irish than the Irish.  And — but that's kind of how I was raised, like so many Americans of Irish heritage — like other people of other heritage as well.

"I was — it was imbued in me to be proud of — proud of my heritage.  And, you know, the pride that was passed down to generations of our family, even though they've been here since the mid-1800s.  And it was just part of the air we breathed, especially up in Scranton and — where we lived with my — near my grandpop.

"But because of being an Irish family, family was everything.  My dad's expression was, 'Family is the beginning, the middle, and the end.' And — and he meant it.

"And — but, you know, the faith we share with one another and the resilience that we've all gone through, both in America and in Ireland, you know, are ones that we've been knocked down sometimes.  Just knocked flat on our back.

"And my — my mom's expression, for real, was, 'Joey, get up.  Just get up.  Get up.'  It's a simple proposition.  It was sort of the Irish of it.  You just get up, no matter what.  Dust yourself off and move.  Not — we're not the only culture that has that view, but it was imbued in my family.

"But the truth of the matter was that in the days when my parents and grandparents were growing up in the coal country of Scranton, being Irish was less than a badge of honor.

"The point was that, like many cultures, like many folks, where you came from was either viewed as an asset or a liability.  And where — you know, but the point is that everything that we were taught — and I'm sure all of you of Irish background, and other backgrounds as well, were taught that — that, you know, it's all about striving for a better future; that you can do better — just simply do better.  And, you know — and you can do it while you cherish the past.

"Now, you don't have to forget the past, or dis- — or disso- — disassociate yourself — yourself from it, but cherish it..."