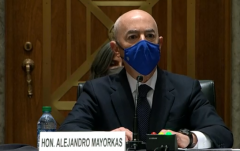 (CNSNews.com) - Illegal immigration is accelerating once again, as thousands of Central Americans are heading to the U.S., taking President-elect Joe Biden at his word that he will halt deportations in his first 100 days, Sen. Ron Johnson (R-Wis.) told the Homeland Security Committee on Tuesday.

Johnson noted that apprehensions at the Southwest Border have returned to around 2,000 a day, and he asked Alejandro Mayorkas, Biden's nominee for Homeland Security Secretary, what a "bad day" would look like, when it comes to the number of border-jumpers.

Mayorkas didn't answer the question. Instead, he told Johnson he looks forward to "studying the data with you, and actually being open and transparent with you." He refused to "pick a number" of illegal crossings that would constitute a "bad day" on his watch.

Johnson next asked Mayorkas if he believes coming to the U.S. for economic improvement is a valid asylum claim.

Again, Mayorkas refused to answer: "Senator, the asylum laws are well established, and they provide that an individual who's fleeing for persecution by reason of his or her member(ship) in a particular social group is deserving of protection--"

"I believe I articulated the legal theory--" Mayorkas started to say, again refusing to answer the question.

Johnson then asked Mayorkas if he would commit to providing the committee with data that will allow senators to continue to accurately monitor what's happening at the border -- "so I have full information," Johnson said.

"Yes, I committed to you that I would do so when we last spoke, and I commit to you now," Mayorkas said.

Mayorkas also committed to enforcing current immigration laws: "I do," he said.

Mayorkas, if confirmed, would be the first Latino and the first immigrant to serve as head of DHS. He came to the United States with his family as Cuban refugees in 1960.