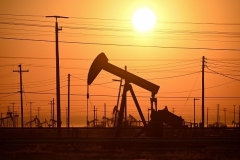 Reading from the letter he'd just obtained, Sullivan said, quoting the president: "You and your companies have an opportunity to take immediate action to increase supply of gas, diesel, other refined products."

"He's trying to bring down prices," Sullivan continued. "And President Biden saying, quote, 'I've directed the Secretary of Energy to convene an emergency meeting on the topic and engage the National Petroleum Council in the next few days.'"

Sullivan summed up: "The president looking to bring down gasoline prices by pressuring refiners and oil companies to produce more, refine more. Will it work? I don't think so in the near term, simply because global demand is so strong, but they're trying, guys.

"This is an incredibly inflationary environment. Which is why, to your point, we are seeing the stock market tank. It's because inflation and the real risk of recession in the next year to 12 months or 18 months is out there," Sullivan said.

Domestic oil producers have endured months of hostility from Biden and his administration.

In fact, earlier this year, on March 18, a coalition of ten oil and natural gas trade associations sent a letter to Biden, urging him to join them in encouraging domestic production to ensure energy security.

"However, there is a key challenge standing in the way of unity: the words and actions of you and members of your administration," that letter said.

In particular, it’s regrettable that you and your White House team have continued to mischaracterize facts regarding our industry – often maligning our motives, and frankly, in some cases, advancing complete and total falsehoods.

"For example, you have said oil companies could be drilling right now because we have over 9,000 approved permits, a misleading statement at best…Also, just last Friday, you said that companies 'would rather take those profits and buy back their own stock rather than take that money and invest it in pumping new oil,'” the letter said.

"We’re going to make sure that everybody knows Exxon’s profits," he said.

"Exxon made more money than God this year. And, by the way, nothing has changed.

"And they’re not — by the way, one thing I want to say about the oil companies: They talk about how we have — they have 9,000 permits to drill.  They’re not drilling.  Why aren’t they drilling?  Because they make more money not producing more oil. The price goes up, number one.

"So I — I always thought Republicans are for investment. Exxon, start investing, start paying your taxes," Biden said.

"We have been in regular contact with the administration, informing them of our planned investments to increase production and expand refining capacity in the United States.