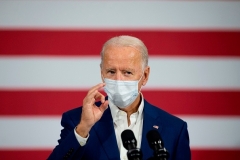 (CNSNews.com) - Heading into the election, Democrat presidential nominee Joe Biden wants Americans to stay angry and continue grieving for lives lost to the coronavirus -- around 200,000 according to some estimates.

Biden has made the pandemic a centerpiece of his campaign to portray Trump as callous and incompetent. However, the death of Associate Supreme Court Justice Ruth Bader Ginsburg and the looming fight over her successor now competes with coronavirus as a major concern for the electorate.

Speaking through a face mask in Manitowoc, Wisconsin on Monday, Biden said:

What worries me now is we've been living with this pandemic for so long; I worry we're risking becoming numb to the toll it has taken on us and our country and communities like this.

We can't let that happen. We can't lose the ability to feel the sorrow and the loss and the anger for so many lives lost. We can't let the numbers become statistics and background noise, just a blur that we see on the nightly news. Two hundred [he meant 200,000] moms, dads, sons, daughters, grandparents, uncles, aunt, friends, coworkers who are no longer with us, and so many didn't have to lose their lives in this virus.

Quite frankly, if only the president had acted sooner.

(This timeline shows the actions taken early on by President Trump and his administration, before anyone in this country had died. At the time -- in late January -- health experts were telling us that the risk to the American public remained "low.")

Nevertheless, Biden pointed to a Columbia University study showing "that if the president had acted just one week sooner, it would have saved 36,000 lives." (No one can prove that, of course.)

"But sadly, it's not over," Biden warned.

As awful as the past 180 days have been, the next 90 days could be twice as bad. Just pause and think about it. We could be looking at, because as I said, between 178,000 and 200,000 lives lost, and all the president does is deliberately change the subject, which is especially infuriating.

Once again, we’re being told that we can save lives, this time as many as 110,000 lives, if we just take the simple steps, chief among them wearing masks, and still the president refuses.

In fact, we just watched him hold an indoor rally with thousands of people, many of whom weren't wearing masks despite the clear evidence that we're putting every one of those people's lives at risk.

The president knew of these dangers back in February, and he hid it from the American people. You can actually hear his own voice recorded by Bob Woodward's interview with him, saying that he understood how bad it was. We hear him privately saying this is a deadly virus, far more deadly than any flu, but that's not what he was saying to us publicly.

Publicly he told us that it was just like the flu and it would disappear in the warm were weather like a miracle.

(Trump said on Feb. 10, when there were 11 active cases in the US: “Now, the virus that we’re talking about...you know, a lot of people think that goes away in April with the heat — as the heat comes in. Typically, that will go away in April. We’re in great shape though.")

“Trump panicked. The virus was too big for him. All his life, Donald Trump has been bailed out of any problem he faced. And with this crisis, a real crisis, a crisis that required serious presidential leadership, he just wasn't up to it, he froze, he failed to act, he panicked, and America has paid the worst price of any nation in the world.”

For the record, on Feb. 29, Dr. Anthony Fauci,, one of Trump's chief coronavirus advisers, noted the beginnings of "community spread" in the United States.

However, in that same interview with NBC's "Today" show, Fauci said, "No, right now, at this moment, there is no need to change anything that you're doing on a day-by-day basis. Right now, the risk is still low. I've said that many times, even on this program. You got to watch out, because although the risk is low now, you don't need to change anything you're doing -- when you start to see community spread, this could change and force you to become much more attentive to doing things that would protect you from spread.”

Two weeks later, on March 16, as the number of cases rose in the U.S., President Trump's Coronavirus Task Force announced its "15 days to slow the spread" initiative, effectively beginning an unprecedented economic shutdown in the United States, the effects of which still linger to this day.

Trump's comment to author Bob Woodward on March 19 about deliberately downplaying the virus came at the same time Trump was working to minimize the damage to businesses and Americans crushed by the economic shutdown, trying to balance health concerns with livelihood concerns.

Also See:
Biden Would Instruct Governors, Mayors to Mandate Mask-Wearing: 'We Could Have a Fine'