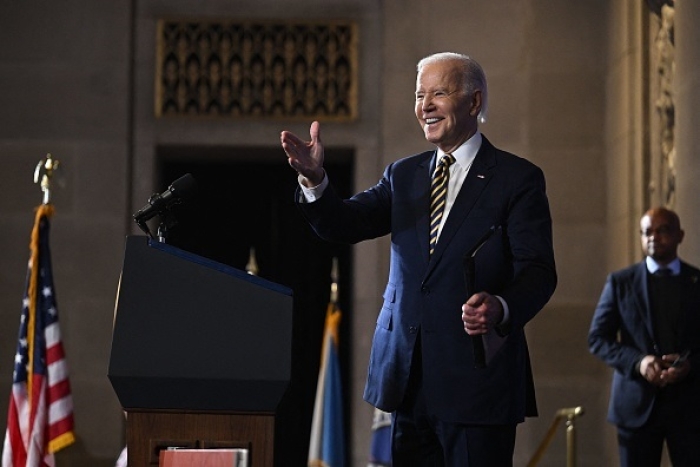 President Joe Biden speaks at the White House Tribal Nations Summit at the US Department of the Interior on November 30, 2022. (Photo by JIM WATSON/AFP via Getty Images)

(CNSNews.com) - President Joe Biden addressed Indian tribes at a White House summit on Wednesday, touting all he's done for Native Americans -- and more that he plans to do:

But as Biden continued, he mentioned "Indian country" nine times, as follows:

-- "Together, my entire administration is advancing the economic agenda and making historic investments in Indian Country — and, I might add, that are long overdue."

-- "Facing a pandemic and economic crisis that disproportionately impacted Tribal nations, I invested more than $35- — $32 billion in the American Rescue Plan, the largest one-time-ever direct investment in Indian Country in American history."

-- "It’s going to develop homegrown clean energy so Indian Country helps lead the future to the goal we’ve set of 100 percent carbon-pollution-free electricity by the year 2035."

-- "That means the funding would always be there, and it insulates Indian Health Services from budget uncertainties [that] make it harder to deliver the care Indian Country needs and deserves.

In his speech, Biden touted all the infrastructure and clean energy investments his administration is making in "Indian Country."

And he promised billions more dollars for tribal health care and in some cases, community relocations:

"That’s why today I’m announcing a $135 million commitment to help 11 Tribal communities from Maine, Louisiana, Arizona, Washington State, and Alaska to move, in some cases, their entire communities back to safer ground, and pay for that.

"I’ve also requested $9.1 billion — that’s with a ‘B’ — billion dollars for the Indian Health Services.  I’ve asked Congress, for the first time ever, to make that funding mandatory — (applause) — a mandatory part of the federal budget. That means the funding would always be there, and it insulates Indian Health Services from budget uncertainties..."